While ligaments provide passive restraint at the end of joint range, reflex muscle action also provide dynamic support in preserving the integrity  and movers at joints including those of the  spine.

Co-contraction of muscles preserve the upright posture of the trunk and allow the spinal joints to be stiffened, stabilized, and moved in a well-controlled manner.  The antagonistic force, and secondly by the additional agonist force required to balance this antagonistic force, together impose greater loads on  tissues of the musculoskeletal system including the IV discs.  This occurs in work activities which involves handling heavy loads, and also includes the flexion that occurs when sitting upright and unsupported on an horizontal surface. 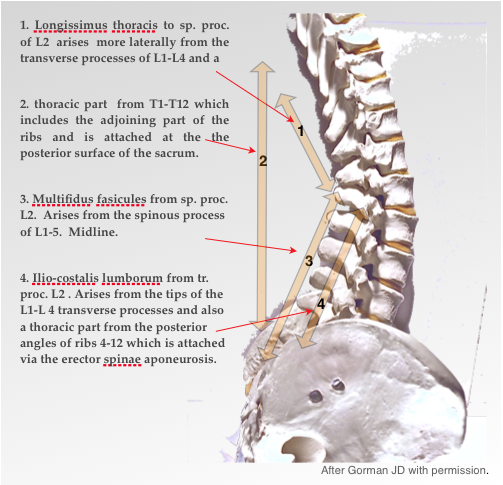 The main movers of the lumbar spine are the most posterior group of muscles.

They control flexion and exert extension, having extensive origins from the transverse processes the lumbar vertebrae and with adjoining rib surfaces of the thoracic vertebrae, consisting of the :-The arrangement is complex with decussating fibres across the midline.   The fibres form fascicles which have a widespread attachment to the ilium, including an extensive attachment via the extensor aponeurosis, and to the posterior surface of the sacrum.    The most relevant to the control of spinal flexion at the lumbo-pelvic junction are those that extend from the thorax to the sacrum and the posterior iliac crest as these have the greatest offset and mechanical advantage. The parts of the muscles that arise from the thorax form the  Erector spinae aponeurosis, whose medial fibre form the Longissimus Thoracis attach to the posterior surface of the sacrum (Bogduk 1992 1997).   The flat abdominal muscles, the transversus abdominis and external oblique muscles, have an attachment to the lateral raphe of the  extensor aponeurosis and thus to the erector spinae.   The latter also attaches to the iliac crest. They are, in part, responsible for maintaining abdominal pressure which has a spinal stabilising effect (Gracevetsky 1985) but may increase axial pressure (Granata 2000).

The over centred position.

If, on lumbar flexion, the wedge angle is lost then these attachments now lie below the lower lumbar joints. In engineering terms this an over-centre mechanism.  The ability of the spine to resist flexion forces will reduce to almost nothing beyond a certain angle of flexion of the lowest joints. (Text & diagrams after Gorman JD with permission).   Note that approximately two-thirds of total lumbar lordosis occurs at the inferior two segments, the L4-L5 & L5-S1 (Kamali 2003).

Reflex muscle wasting is a usual accompaniment of any spinal joint disorder and this has important implications.  Following an acute episode of LBP, wasting has been shown (Hides, Stokes 1994), by ultrasonography, to occur surprisingly quickly, usually within 2 weeks.    The wasting is confined to the specific spinal level of the lesion and on the side of the lesion and involves mainly the multifidus muscles at a local level.    These changes result in weakness, fatiguability and loss of coordination and are likely to be a factor in the perpetuation and recurrent nature of chronic LBP (Hides, Richardson 1996).  The changes in the muscle fibres are complex and their cause not completely understood.  Reflex neural activity may play a part.  This has been found to be the case in analogous conditions of the knee (Johansson 1991)  and ankle for which treatment using an unstable standing platform (‘wobble board’) for balance has been found effective.    These atrophic changes are not reversed spontaneously even after return to normal activity.  It has been  shown that specific stabilising exercises for the multifidus  help recovery but these are difficult and specialised.    Stabilisation is an important factor in preventing chronicity and LBP recurrence (Saal & Saal 198941, Wilke 199571).  It will be shown later how the unstable mid position of the 2Tilt chair helps in this rehabilitation.  The addition of some side-to-side instability might be advantagous.   A number of stools and chairs with unstable, seats, or wobble balls, have been developed.

Studies by Sweetman at Swansea suggest that heavy work provokes a facet joint syndrome but is protective for the disc.   In previous studies the various LBP syndromes were not distinguished and so statistical results tended to be inconclusive.   This would confirm the observation that people engaged continuously in heavy work, or other exercise, having strengthened their back musculature, have a decreased liability to back ache.     This is in contradistinction to the suburban weekend gardener who attends my spinal clinic on a Tuesday morning with a facet joint sprain.   Unlike excessive strains, usual activity is not a significant aetiological factor in disc breakdown although may exacerbate minor backache.  Many patients attend saying “I think I’ve pulled a muscle in my back” or even “My doctor tells me that I’ve sprained a muscle in my back”.      Clinically this is a rare occurrence and muscles are usually only damaged by trauma in rough contact sports and even then a sudden over-strong muscular contraction snaps a bony lever at its attachment.   This observation is easily tested by exerting a strong resisted spinal extension, so that the spinal extensor muscles are isometrically contracted without any joint movement.  Pain or weakness on this action indicates a muscle lesion and is so rare that it is omitted from the routine examination by most orthopaedic physicians.   The role of pain arising from muscles is uncertain and controversial. Tender knots and nodules which are commonly felt in the muscles and can command much attention, which in the past were known as ‘fibrositis’, are usually due to localised spasm which is a referred phenomenon from a lesion in a deeper structure.

Muscles moves the spinal joints which alters intra-disc pressure which results in the pumping effect, responsible for disc nutrition ⟶

Wilke et al. A novel approach to determine trunk muscle forces during flexion and extension: A comparison of data from an in vitro experiment and in vivo measurements. 2003;Spine, 28(23):2585-2593.