The Sit-Stand concept  slowed following work showing less difference in sitting and standing intra-discal pressures than was first thought.  A comeback is occurring as field research has shown the importance of keeping staff exercised and this is increasingly recognised.

Offices could have standing as the default working option with seating as the alternate mode.  The 2T (4M version).takes an opposite but complementary approach with the reclined mode being the default and easy ability to stand subsidiary.   For a more revolutionary development see next post The end of sitting?

Originally Nachemson and others showed that the standing position had a lower intradiscal pressure than upright sitting.  This suggested that incorporating sitting and standing, with a sit-stand desk, could be beneficial if designed into an office environment.
This sit-stand concept  has slowed following later work (Wilke 1999) showing less difference in sitting and standing intra-discal pressures and the general recent ergonomic improvement of office chairs.

Effect of movement on the IV disc

The negative consequences of constrained sitting has been described by

a number of authorities.  See ☛ Exercise & movement→.  It has been shown that disc nutrition depends on the pumping action of pressure changes due to changes of position and is probably important in avoiding later degenerative changes.  In the context of chair design, movement is comforting and avoids the adverse effects of a prolonged constrained static upright mode on general health (See (Lueder R 2002).

Variable standing may be ergonomically superior to the prolonged use of existing upright chairs.    See ☛ BIOMECHANICS that determine safe sitting→).     The sit-stand concept can be said to side-step the issue of the high prevalence of spinal disorders with conventional office chairs.  Also relevant is a report by The UK DoH (Dept. of Health, Dept of Children, Schools & Families.) on ‘Sedentary Behaviour and Obesity: Review of the Current Scientific Evidence’.→  https://assets.publishing.service.gov.uk/government/uploads/system/uploads/attachment_data/file/213745/dh_128225.pdf

But, on the other hand, prolonged standing is tiring and affects venous return.   Most people prefer sitting, because it is energy efficient with less action by the Erector Spinae & leg muscles than when standing.   Having spent many hours in operating theatres, I am perhaps somewhat biased against prolonged standing.  HAS.

Sit-Stand.Com is official supplier to the Get Britain Standing campaign. For summary guidance please visit: Benefits of Standing   They say Sit-stand desks (commonly referred to as “standing desks”) are increasingly expected to become the norm in the near future. Already in Scandinavia 90% of office workers enjoy the health benefits of sit-stand desks largely driven by workplace health legislation.

Not all office work is suitable for a Sit-Stand system and prolonged sitting may be required.     A 2T (3M) chair is essential and preferably the 4M workstation.  2T CONCEPT a full solution→

Back to the Future

Oddly, the Sit-Stand concept has similarities to the Victorian office.   For a light hearted account see ☛ HAS, on ☛ Office health (& RSI)→ 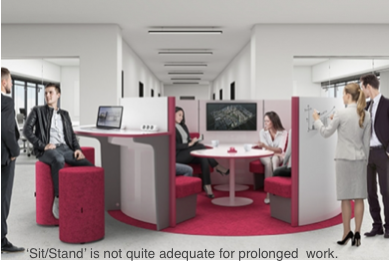 For an example  by RAAAF (Rietveld Architecture-Art-Affordances) , See ☛ The end of sitting?  →

The first known ‘office-based’ study in the Department of Clinical Sciences and Nutrition, at the University of Chester, Chester, UK, 2016,  compared two days of continuous monitored capillary blood glucose responses to sitting and standing in normally desk-based workers.  The results provided encouraging signs of attenuating post-prandial glycaemic excursion  and why avoiding continuous sitting at work could benefit cardio-metabolic health.  The following articles are referenced:-

Offered by the Market is often little more than an upright office chair or stool and a variable height table as shown by the Albion range.

Improvements include  components which could be used in the 4M or 3M Workstation.   Shown is another Albion example. http://albionchairs.com/office-chairs-by-application.htm 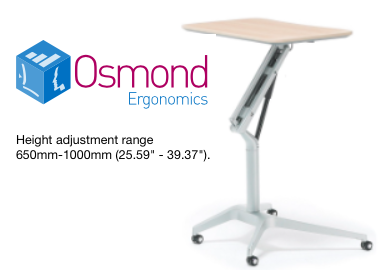 The Osmond is a minimalist variable height desk.

←Posturite have shown this.

For a more sophisticated solution, a ‘stand’ mode can  be incorporated into the a 3M ‘desk-less’ workstation which then becomes a 4M concept (and a ‘full’ solution ).  This extra mode results in the  first change since the inception of the 2T concept in 1998.   (See ☛workstations→).

Albion, once again, have a number of simple good stools.

A recent, more complex example is the Freedman chair in which the 2 halves of the seat can move independently, intending to accommodate spinal irregularity (scoliosis) and pelvic side tilting.  The emphasis is on the FTS concept and movement.☟

Apparently the model succumbed to a mechanical failure. https://www.kickstarter.com/projects/929020713/the-freedman-chair-a-better-way-to-sit

The HiLo
by Box Clever 2016, an innovation agency led by industrial designers Bret Recor and Seth Murray for Knoll  Knoll produce a number of high end task chairs with semi-remediation such as pelvic support but have not yet made the jump into a fully remediated chair.

“The new Sitpack ZEN is the world’s most compact, and functional seating designed to improve your posture, whether you’re indoors or outdoors ..