A personal journey to explored the bio-mechanical (ergonomic) factors that may determine spinal pathology    A fully optimised design concept  for an ergonomic chair developed itself.

This work.   Why did I bother?

As a Consultant in Orthopaedic (Musculo-skeletal) Medicine, patients with backache kept asking me to recommend a work chair for sitting safely.   A difficult question to answer as there seemed to be no work chair 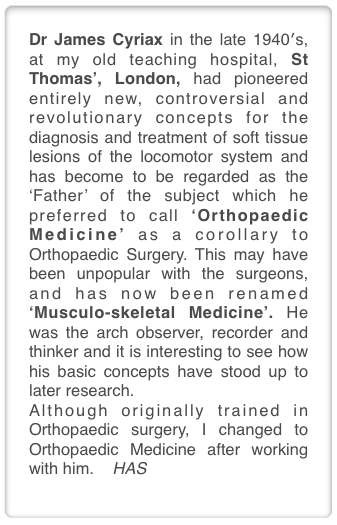 on the market, in 1998, that would do anything other than make prolonged sitting a recipe for making their backache  worse.   Most users, with even minor degrees of low lumbar backache, the clinicians who treat them and chair designers who aim to help are aware that prolonged sitting is a major factor in aggravating and perpetuating their symptoms.

So after 50 years, I decided to look afresh at the basic scientific facts of spinal pathology and bio-mechanics and see what emerged.   What emerged  confirmed the view of the adverse effect of mid-upright sitting described by AC Mandal and are still evident in most, so called,  ergonomic chairs.

Partial remediations.   Systems in use at present,

See below and ☛ REMEDIATION→

The ergonomic studies suggested a logical alternative complete solution which is proposed here.  This was a new approach to ergonomic chair design aimed to address the adverse bio-mechanic problems of the upright sitting mode used in most modern office and work chairs. This was my view advanced in 1998 ☛ Early 2T concept→.   At first sight, it may seem odd that the office worker of the near future for sitting safely will be using work chairs in a reclined position for some, or most, of the time while using a computer.  This excites ‘familiarity bias’ but is likely to become universal if vindicated by field trials.

This work, I hope, shows the evolution of thinking from early to later work in relation to sitting safely and ergonomic chair design.   Patient input and clinical observation is dismissed by scientists as ‘merely’ anecdotal’.   However, with several decades of seeing patients with backache, I make no excuse for including some as it is the start of the scientific process which proceeds to systematic analysis, experimentation and efforts towards falsification.

There is a small detail that you might like to add in to your forward thinking, which takes the notion of some form of certification for ‘good’ chair shapes a step further than we discussed yesterday.

What is to me so delightful is Dr Henry has very elegantly identified the core detail of ‘good sitting’ as maintaining the angle of the pelvis, so that the first few vertebrae above it are sustained in their right geometric relationships and carry their loads easily, without the geometry becoming distorted and the surrounding tissue strained, causing back problems. The notion of some form of certification process hinges around the understanding of the notion of ‘good sitting’.

There is a step beyond this. Once the notion of ‘good sitting’ becomes not only well understood but also well accepted – and I think we have enough clarity from all the work that Dr Henry has pulled together, and enough medical agreement about that work, for this to happen – there comes a point where it becomes professionally unacceptable to sell chairs that cause ‘bad sitting’ and will in due course cause back ache. At this point the position of the global chair industry shifts, because you cannot sell large numbers of office chairs that are known to induce back problems and open yourself up to what the Americans would call a class case in the law courts, accusing you of knowingly selling a harmful product.

I guess the example would be seat belts in cars. It is not only that they save lives for those in the car. They save an inordinate amount of accident and emergency time and effort in hospitals on Saturday nights. So we don’t wear seat belts ‘because they are a good thing’ we wear them because not to do so is a bad thing.

There are of course many, many ways of producing ‘good sitting’. But where I think there is real value in the simple clarity that Dr Henry has achieved in his work, is that the essentials of ‘good sitting’ are made very clear. And THAT – the spreading of that message – in the end has the power to ban ‘bad sitting’.            Best regards,     Jim

Prevalence and economic cost of LBP.→   The actual increase of mechanical spinal pathology and backache prevalence seems to be a genuine phenomenon of the 20th century and is rising exponentially (Hemingway 1997) with the increase in sedentary occupations.

In the United States About 100 million workdays are lost annually  (Johanning 2000).  Insurance figures show that 82% of US office workers complain of LBP (personal communication 2012 HAS),   Lower back pain’s economic impact is shown to be the number one reason for individuals under the age of 45 to limit their activity, second highest complaint seen in physician’s offices, fifth most common requirement for hospitalization, and the third leading cause for surgery.  (Health and Safety Executive‘s Better Backs   .https://en.wikipedia.org/wiki/Health_and_Safety_Executive).

Mandal AC  showed that the recommended ‘correct’ position was fundamentally wrong.   This has been

→  He advocated a forward tilted seat (FTS) which is incorporated into the  Ischial off-load system now used by some high-end office chairs.    (See  ☛ . mid-upright sitting.→).

Gorman JD, an engineer turned chiropractor, showed how this effect (backward tilting of the pelvis) could also be remediated by correctly placed back support at the level of the Iliac crest which he called ‘Pelvic Support’ as distinct from ‘Lumbar Support’.          (☛BACKRESTS. Pelvic support v. Lumbar.→). 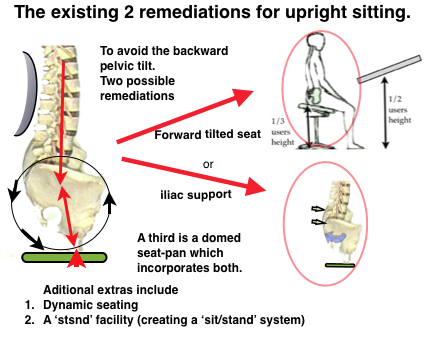 Return to the HOME Page →