Anecdotally the first criticism of the 2T concept, back in 1998, was from a CEO “This is too comfortable. My staff will go to sleep”. Although he was lying on the P1 prototype with no upholstery whatever, just correctly shaped ply-wood. I responded that a nap might benefit productivity and it was unreasonable to keep staff awake with uncomfortable chairs.   I was unaware of the later research.    (see ☛ Sleep→ in the early 2T concept under ‘criticism’.)

sleep of between 30 and 90 minutes in the afternoon could help companies improve productivity. A
poll of 2000 UK office workers by the energy drink manufacturer, ‘Lucozade’ (2013), 22% reported having fallen asleep at their desks, usually in mid afternoon, due to an energy slump, usually lasting about 47 mins and associated with large lunches, sleep deprivation, alcohol and ‘unhealthy’ snacks. Research at the University of Michigan found that the subjects who had taken a nap felt less impulsive, and weathered frustration more easily, than those who watched a nature video (No ref). (See ☛Uptake?/Implications?→) 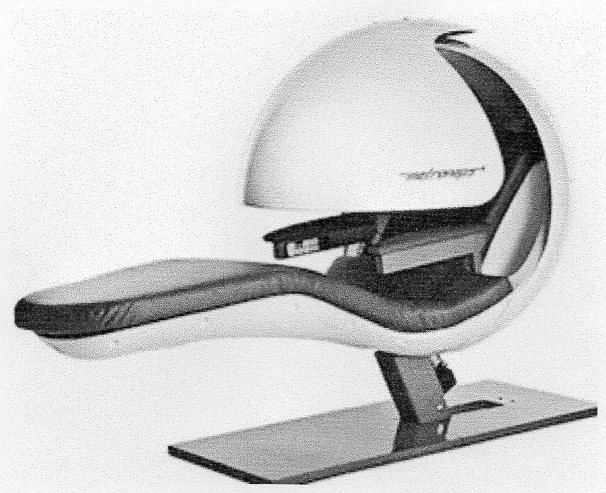 The MetroNaps EnergyPod is intended as a sleep module for users who wish to take a nap.  The hood allows it to become a semi Pod. It is of interest as it could be incorporated into a 2T chair (3M or 4M) and contain the monitor etc.

On their website they say “In recent years, countless studies have extolled the virtues of napping.  A quick power nap can sharpen your focus , boost creativity, and mitigate the effects of sleep deprivation. But if you work a 9 to 5 at an office, how can you fulfill your nap quota without being called out for sleeping on the job?If you work at the posh offices of Google, The Huffington Post or Cisco Systems Inc., you take a break from your desk and slip into your own private “sleeping pod.” The $13,000 pods are the brainchild of Christopher Lindholst and Arshad Chowdhury, who have been preaching the benefits of napping at work since they opened their company MetroNaps in 2004. Starting out as a retail operation, MetroNaps now manufactures a line of sleep pods and acts as a kind of “sleep consultant” for companies, offering guidance on how to work napping into a work culture that they say is becoming increasingly accepting of the idea.”

Arianna Huffington, Editor in Chief, Huffington Post Media Group“When we first started the nap rooms, a year and a half ago, people were reluctant to use them. Now, we need to open a third one; they are so overbooked. People blog even about the impact it has on them to just get 20 minutes in the middle of the afternoon.” – As quoted in CBS This Morning, June 12, 2012 http://www.metronaps.com→

It is easy to have a nap in the 2T reclined mode,    see ☛Early 2Tilt chair CONCEPT and criticism→ .  For privacy in a busy office it is possible to design a hood that can be pulled down.    This would be more universally adopted and much less expensive in both cost and space. than a dedicated system. With the advent of AI and robotics offices will be geared to the emotional and physiological requirements of the highly paid staff.   2 Tilt chairs and their 4M derivatives will be exactly relevant.

Return to  MANAGERS on OFFICE HEALTH→