The development of upright positional MRI (pMRI) scanners,  allows imaging of the spine in the load-bearing postures which are relevant to sitting. 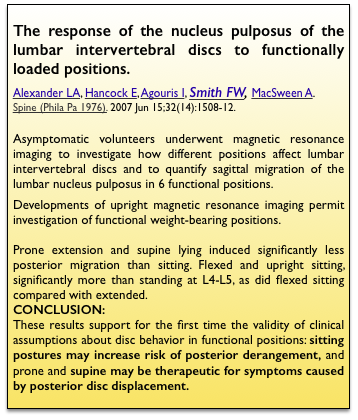 Upright sitting, slumped.The usual position and was represented as 30% by students at Cambridge in a quick survey. Intradiscal pressure /load  measured by    Wilke (2001) was 0.48MP  and by Sato  1127 kPa , 800N.  This was less than sitting upright and can be explained by the pressure relieving effect of the abdominal cavity.

Upright sitting with lumbar (not iliac) support.  As can be seen, the support is applied above the Iliac crest and can be expected to have  an opposite effect at the lower 2 joints (Gorman).   This is shown to be so. 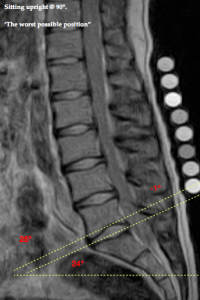 In the flexed sitting view (left), It can be seen that there is an adverse posterior position of the Nucleus Pulposus (NP) of the vulnerable L4/5 & L5/S1 discs. When compared to non-loaded, uncompressed disc scans (right), the NP has migrated, or in clinical terms there is retropulsion, to the position that is potentially dangerous. 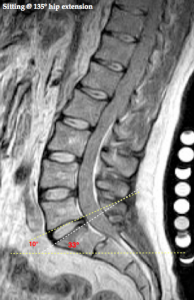 This is precisely what Cyriax had postulated in 1945.

For a review from Working Ergonomics→ 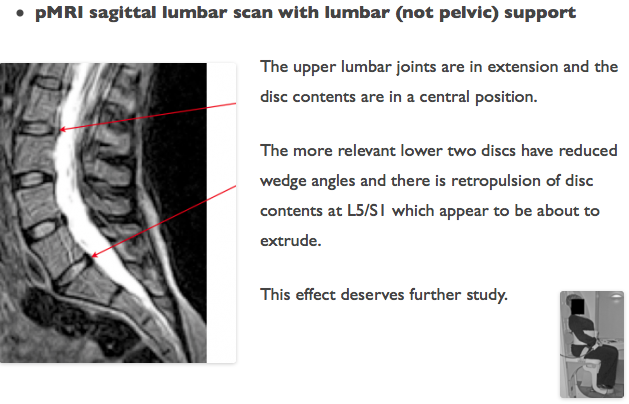 This investigation using Whole-body Positional MRI (pMRI), by FW. Smith, Bashir W (2007) found that the upright position, at 90°, caused disc contents to move the most, while the relaxed position (135°/45° reclined) caused disc contents to move the least. This confirms that the upright position is the worst for the back, while the relaxed position is the best.   From  which the following pictures are derived (arrows, etc, are added).  This confirms the bio-mechanical evidence.

pMRI scan in reclined, relaxed, sitting mode shows the NP in a safe mid-position.  The hip angle is at 135°.    the NP is in the safe  mid-position.   This is practical and preferable and is advocated for the 2Tilt principle in the reclined mode.

pMRI scan in an upright sitting mode shows the NP has translated posteriorly which can culminate in protrusion.   Hips are at an angle of 90° with the seat-pan horizontal.

This is visual confirmation of the bio-mechanical evidence.