Better!   But not for office work. 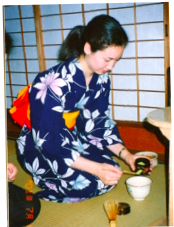 The Japanese kneeling posture, like most things Japanese, is highly sophisticated.   It is elegant particularly when a Kimono is worn and for women the firm Obi also provides support.   The body weight rests on the heels of the extended feet so that the hips are extended at a slightly greater than a right angle. This allows the pelvis to rotate forwards, as with a forward tilted seat, resulting in  a lordosis at the lower lumbar joints.    The torso can remain comfortably upright as in the modern, forward tilted Scandinavian Balans chair. 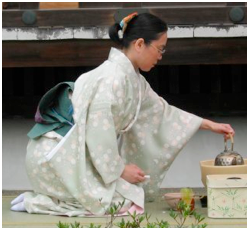 The Japanese, like most people of the Far East, have hyper-mobile joints but the more hypo-mobile Europeans find this position uncomfortable to maintain as it requires extreme forced flexion of the knees and extension of the ankles.    Frequent and prolonged use of this position results in callus formation on the dorsum of the feet.

When I asked this Icelandic girl to sit to have her neck examined, she adopted the Japanese sitting posture on a chair.   When asked “Why?” she answered “Because this is the way  that I have been taught by my Physiotherapist.”  Note that her hips are extended to a near FTS extent.

The traditional Japanese sitting posture was shown in a study (Schlemper 1983) to cause less back problems than sitting in a chair but increased as upright Western seating was introduced.

Various sitting and standing postures were measured for degree of lordosis and electrical muscle activate (Dolan, Adams 1988).    The results confirmed that of the sitting postures, the Japanese involved the least flexion but the most muscle activity to maintain, whereas  slumped sitting on the floor  involved much greater lumbar flexion but very little more muscle activity than standing.

The slumped and squatting positions are used by most non-Western peoples and who tend to have a low incidence of LBP (Fahrni  1965, Jonck 1961) , the wedge shape of the vulnerable lower two lumbar joints (L4/5 & L5/S1) is preserved although there is flexion throughout the lumbar spine  (Bruggeman 2000).   Intra-abdominal pressure maintained by the abdominal and spinal muscles acting through their flat tendons and fascia and the upper body weight is brought forward to lie over or in front of the abdominal cavity which can be regarded as a balloon or football,  This has a pressure relieving effect on the spine and transmits a proportion of the upper body-weight  directly to the pelvis.  Gorman has also pointed out, this position exerts traction on the lower two lumbar joints, so that although the joints are flexed the compressive force has been reduced.

Next, some side issues, ☛ Why?  Mandal explains⟶

One thought on “How other people sit”