The ‘Deskless Chair’ derived from the ergonomic importance of a reclined work position, is morphing into the ‘Workstation’. This should reduce the incidence of LBP and other health issues.

In 1903 Ford’s ‘Horseless Carriage’ had morphed into the Model T, capable of 20 horsepower In 1908.  This, at least, solved the “great horse manure crisis of 1894” when it was suggested that London’s streets would be clogged in 9 feet of horse manure in 50 years. It’s descendants are, in turn, being disrupted by ‘the driverless car’.

Disruptive technologies have to prove themselves first. They do so by working on the same infrastructure as the incumbent leaders. Cars had to run on the same streets as horses. Dial-up internet connections in the late 1990s used the copper in the phone networks.  (Dan Denning Publisher, Southbank Investment Research ).   So, work-stations have to use existing office spaces before becoming universal.

We are seeing a number of ‘OFFICE WORK-STATIONS→’ type models which include a reclined work mode and so are superior to the present (2016) upright conventional  models.  The models shown here are a step in the right direction but are not 2T compliant and appear to ignore the science and are based on engineering.    They do not invite a great uptake, in spite of extensive PR.  WORK-CHAIRS, a new breed with a reclined mode →

This has improved.    Although not 2T sophisticated the designers of the following may have seen my posts.  This advert arrived in my post today (27/11/2019). 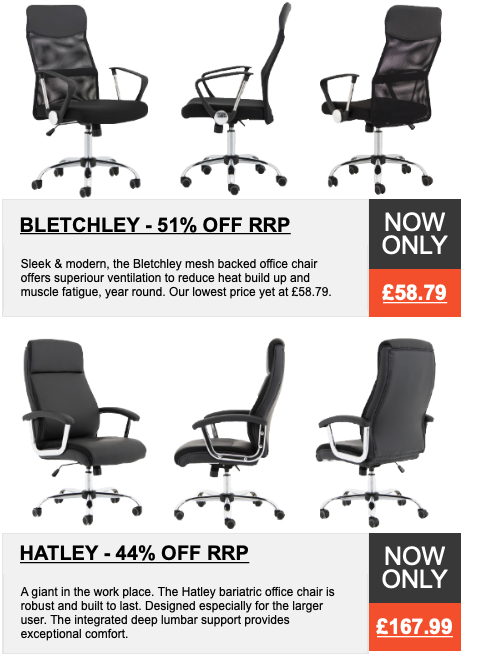 At least there is an apology for pelvic support and a headrest.

Nachemson A. Towards a better understanding of low back pain: A review of the mechanics of the lumbar spine. Rheumat Rehabil 1975; 14:129-143.