As already described ☛ Why? Mandal’s Homo sedens workers in Scandinavia, advocated a seat that was tilted forward and down by 20-30° from the horizontal, allowing the hips to extend to 120-130˚ and the pelvis to tilt forward with the lower spinal joints adopting the correct, safe, lordotic posture.   No back rest was necessary and the torso was free to move.   The  unsupported spine may incur slightly greater intra-discal loading probably from muscle co-contraction which is tiring and makes the FTS unpopular.   Makhsous (Makhsous M. 2003), has shown that sitting on a horizontal surface involves lumbar flexion relative to standing and   has also shown that with seat angled down, weight is largely shifted to the proximal half of the thighs at 18°. This was also shown in previous work (Corlett, 1999, Eklund et al, 1982, Schoberth, 1978).  This is relevant for  it’s short use in a 3M chair.

The kneeling component of the Balans chair, shown, is to prevent forward slipping.  With a static FTS this tendency to slide forward is tiring to resist.  Alternative options are non-slip materials, memory

(See ☛ 2T Upright mode→)
Mandal determined, by tilted incrementally the chair seat and work surface, that an optimal position resulted in a correct lumbo-sacral lordosis and hip extension. Most people with back pain will find this very comfortable, but for the first weeks you will only be able to sit like this for 5-10 minutes, because your back muscles need training.”  ☞ Mandal 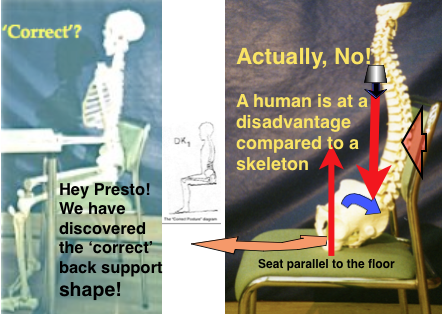 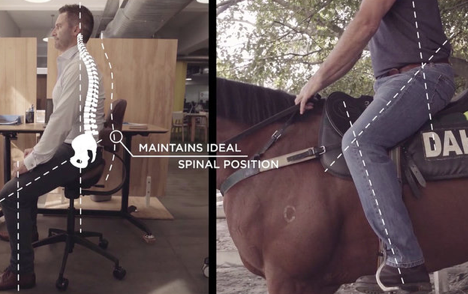 Available 2020.   An illustration from an advertisment explaining the concept for this seat, designed by David James France, an Australian chiropractor. https://www.kickstarter.com/projects/workhorsesaddlechair/workhorse-saddle-chairs-improve-your-posture-and-w?ref=pr.go2.fund&utm_medium=referral&utm_source=pr.go2.fund

The Ischial Off Load’ system

The Ischial Off Load’ system is a variant consisting of a convex chair seat so that the  front half of the seat is tilted forward approximating to a FTS.  It is now incorporated in several office chairs.  ☛ Ischial ‘off-load’ system→

One thought on “The FORWARD TILTED SEAT (FTS).”