The Ischial Off Load system consists of a convex chair seat.  This combines both a FTS and allows, at the back half, pelvic support. 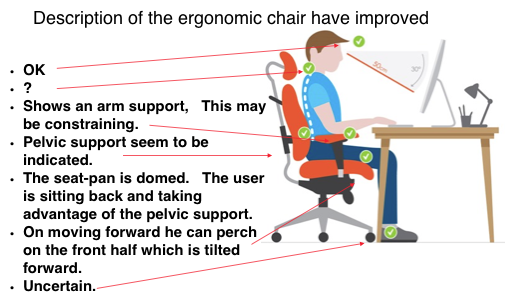 This illustration for an advertisment (but not my comments) seems to show an Ischial Off Load system.   The front half of the seat is tilted forward approximating to a FTS so that the upper body static load ‘Off Loads’ pressure from ischial tuberosities to the thighs when sitting forward  and, depending on the chair height, increases the hip angle.   The back half (BPS) tilts back by 18° and allows the torso to sink back against the ‘Lumbar’ support (One hopes that this is pelvic not lumbar support) and so some of the static load transfers from the ischium to the backrest.   The ischial tuberosities get wedged against the backward sloping part of the seat surface which prevents the normal tendency to slide forwards on the seat when the lumbar or pelvic support pushes forwards enough to be effective. This means that the support can be more effective and if low enough can be pelvic support even though it doesn’t come round the sides of the iliac crest as in the original Gorman model which was more comfortable, effective and had no need for adjustment.  This advantage is slight compared to that of a reclined mode.

In the Makhsous study (135),  kinematic, force, EMG, and X-Ray data were collected at the lower lumbar spine and showed some reduction of intra-discal load compared to unsupported or sitting with a straight backrest.  An ‘Off Load’ system seems to be described although the term is not used.   In the design used, adjustments could be made in the back and ischial supports  A plethora of adjustments is confusing and can be adverse, in a work chair, if adjusted wrongly.  Ideally they should be avoided.

‘Off Load’ is perhaps an unfortunate term.   Off loading from the ischial tuberosities (ITs) is subsidiary 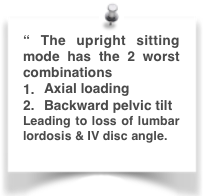 to the  extension of the hips due to the FTS effect and and pelvic support achieved by the back half of the seat.   I have noticed that users tend to take advantage of the FTS component and perch on the front edge.  It is still possible for the user to sit in the middle of the seat and so adopt the upright ‘worst possible position’.

Gorman, himself, has posted a comment, in his usual vigorous style, related to the backward component.

From JD Gorman     24 August 2013 16:34
Re: ‘Off Loading’.
Reading through the Makhsous document, off loading seems to mean reducing the force supporting the body at the ischial tuberosities which must then be replaced by a force to take the weight on the thighs via the hip joint. Why this should be promoted as advantageous, I cant think. The ischial tuberosities have been the support point in sitting for 50 million years in the monkeys, the apes and all our bipedal ancestors.

I think the authors have misunderstood the mechanics of sitting with the rear part of the seat sloped backwards. On trying a similar chair, the curiously named DROOP SNOOT,  I found that the ischial tuberosities got wedged against the backward sloping part of the seat surface which stops the normal tendency to slide forwards on the seat when the lumbar or pelvic support pushes forwards.    This means that the lumbar support can be very effective and if low enough can be pelvic support even though it doesn’t come round the sides of the iliac crest (as in my original concept).

Those DROOP SNOOT chairs certainly worked for back sufferers in locating the pelvis but the forces were high which made them uncomfortable for prolonged sitting.   They sold in all the back shops about 20 years ago and I visited the manufacturers in High Wycombe.

As you say seats like the HM Aaron chair do the same to some extent but not as much as the solid seat of the droop snoot. If it fixes the pelvis and therefore eliminates the backward rolling then it will eliminate the bending force in the spine which normally stops the backward rolling which occurs with normal lumbar support. This would reduce intra-discal pressure because part of the pressure is the direct axial weight. The other part is due to the tension in ligaments, such as  the supraspinous. ie bending force in the spine will result in compression just as it does in lifting.     John

JD Gorman explains the difference in stresses of posterior elements which occur in Lumbar and Pelvic support.

Henry      See attached pic from my document at http://www.naturaljointmobility.info/Prosthetic%20supraspinous%20Ligament.htm 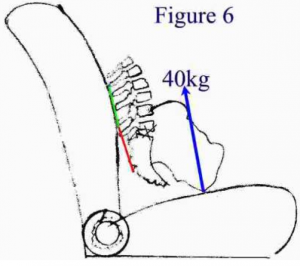 A. If this car seat incorporated Iliac support, then the compressive force in the L5/S disk would be a bit less than the 40kg weight of the whole of the upper body.

B. If a lumbar support seat, as shown, then the only thing that can resist the occurring backward rolling of the pelvis is a tension in the red ‘posterior elements’ thing, the supraspinous ligament, the fascia or muscles. Regardless of the contribution of each of these structures in resisting the backward rolling, their total tension must result in additional compression in the disc.                  Very roughly, by simple mechanics, in this drawing, the compression will be an additional  80 kg or so , tripling the compressive force in the spine to 120kg (very rough calculation!!)

Incidentally this shows the agreement between us of preserving lumbar lordosis and against the standard office chair or car seat.   You see the compression in the disc as the problem and I see the tension in the “red” ligaments as the problem because it stretches them outside their natural range.    Regards,   John

John.      An interesting analysis.  I think we agree that the common pathway to IDD is increased intra-discal pressure and associated with reduction of the disc wedge angle due to flexion of the lower lumbar joints.  Your analysis shows that lumbar support may increase the axial pressure in addition to allowing backward tilting of the pelvis and reduction of the wedge angle.   In popular parlance, a ‘double-whammy’.  This may account for the discrepancies in the findings of intra-discal pressure research where the precise support is not specified ( a vague photograph is inadequate).

In addition to the above you are also postulating malfunction due to ligament stretching and a muscle ‘over centred’ position.   I mention this in the post ‘Anatomy’/ligaments where CTD is mentioned.  Solomonov18 seems to be the expert here.  Yours,  Henry

One thought on “ISCHIAL OFF LOAD system”