A continuation of the comments in the PROLOGUE.

For a copy of the above, that is easier to read,

To postulate a hypothesis for limiting LBP on prolonged sitting existing background scientific knowledge of spinal pathology and bio-mechanics, in combination with clinical experience, arguing from cause to effect,  was easily achieved and resulted in the 2T concept which is shown above.  Conventionally this would need to be confirmed or falsified by experiment, in this case by field trials.   With no commercial chair models available this was not possible, to date.  Subsequently a different approach has emerged, closer to ‘inverse probability’ of ‘Bayes Theorem’.  The process is reversed, watching the effects to determine the cause.  In this instance later research has confirmed the original assumptions with a complete theoretical confirmation by pMRI sudies. 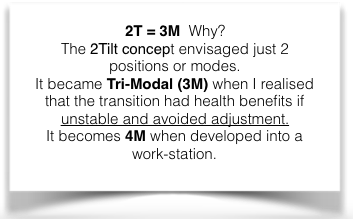 The original 2T model has remained intact except that the transition from reclined to upright conferring physiological advantages and has becomr recognised as a mode in its own right,    The bi-modal, 2T concept  becoming a tri-modal (3M) concept.    The desk-less workstation version, allowing a ‘standing’ mode became a 4 mode concept (4M).  ☛work station→ . 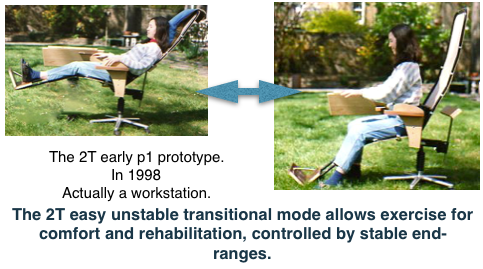 Interestingly the prototype1 shown was a desk-less version.  In time this has become recognised as a ‘Workstation’, with no help from me.    At that time IT components were clunky.   The advances in IT hardware now make a desklessworkstation an obvious solution and has added advantages.    I am now (2015) returning to this as a Tri-Modal (3M) concept with an additional Sit/Stand mode, transforming the 2T to 4M. →WORKCHAIRS, a new breed with a reclined mode.

An upright chair at a desk may become to look decidedly retro-.

The concept has not changed since then. Additional evidence has accrued along the way and perceptions have progressed to become more supportive.

Orginally it was met with blank incomprehension!  At first sight, it seemed odd that the office
worker of the near future would be lying in work chairs in a reclined position for some, or most, of the time while using a computer and was regarded as a ‘paradigm shift’.  In the next 17 years I have noticed a softening of this incomprehension and an adoption of at least some new ideas.  Now, in 2015, a chair is proposed, the Altmark,(☛Some chairs→ )that has at least an upright and reclined work position.    This work, I hope, shows the evolution of thinking from early to later work in relation to sitting and chair design, commonly designated ‘ergonomics’. Although intended as a medico-scientific study it started with the experience of patients and I have included their interests.   Patient input and clinical observation is dismissed by scientists as ‘merely’ anecdotal’.   However, with several decades of seeing patients with backache, I make no excuse for including some insights as the start of the scientific process which proceeds to systematic analysis, experimentation and efforts towards falsification.   HAS 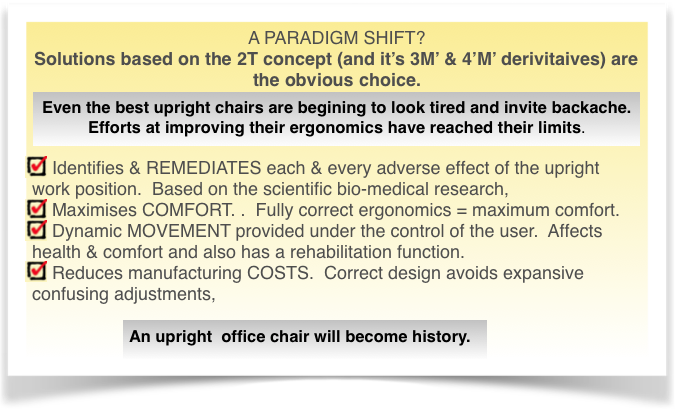 I have heard only three precise criticisms of the 2Tilt chair concept.

These are good examples of ‘familiarity bias’ resulting in denial and prejudice for such an unfamiliar concept.

The argument for limiting footprint is that offices are priced by the area of floorspace. The overall cost (2011, rent, tax, maintenance) of a 11sq ft workstation in the London ‘West End’ is £14,1530 pa. It is less in the City ‘Square Mile, £8,720 and less still out of London being £4,250 in Birmingham. Costs in the City have reduced by 7.3% but risen by 12.5% in the West End (Times, London14/2/20). Obviously managements will have to rethink their strategies to reduce these costs. Limiting workstation footprint is a shortsighted option. It is a false economy to cram work stations into a given space, especially as better layouts become usual and when well designed desk/chair workstations become more universal. Jukes showed that productivity is reduced, by as much as 30%, in a stressful working environment. Costs are increased by low level morbidity, absenteeism and staff turnover. The improved ergonomics removes at least one cause of stress in the office environment and this translates into increased individual productivity leading to reduction in staff numbers and with better layout, increase usable office space. The slightly greater cost of the footprint is more than offset by increased productivity and this is what eventually improves the ‘Bottom Line’.  (See ‘2T & office design’).

This consideration becomes largely obsolete as The 4M concept, with a smaller footprint than a desk/chair workstation becomes mainstream.

I responded that a nap might benefit productivity and it was unreasonable to keep staff awake with uncomfortable chairs.   I was unaware of the later research.    (see ☛ SLEEP→)

The 2t concept is a ‘paradigm change’ and will create PR with the large insurance & media interest,

With this, uptake is likely to be large and quick.   It could be said that a paradigm change could be equivalent to a potential disaster to a firm if there is a failure to recognise it’s implications .  Chair manufacturers which do not have a 2T model in their range   may react with normalcy bias..”(See Uptake?/Implications?).