Ergonomics of sitting safely.   How we sit now is badly!  The recommended ‘correct’ posture  being almost impossible to maintain, most of us sit in a posture that can be shown to invite spinal breakdown.

The photographs show a group of doctors and physiotherapists who are attending a course on orthopaedics.    Most are sitting slumped with rounded back. This allows the pelvis to tilt backwards and  stretches the posterior ligaments but is not as adverse as sitting bolt upright as currently advised and is nearly impossible to maintain. 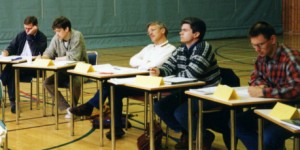 The chair seats are parallel to the floor so that an upright posture must entail flexion of the hips at a right angle.   The lumbar lordosis is lost and  the adverse flexed position of the lumbar joints occurs which can be clearly seen.   Crossing of the legs accentuates this.   Note that none is using the backrest except for the doctor in the white shirt  who is in a semi-reclined slouched position.  In this mode the lower lumbar joints may be unsupported and flexed (but see below) and the posterior ligaments are stretched but the intradiscal pressure is reduced from 0.44 MPa to 0.27 MP as shown in a study in Ulm by Wilke (Wilke 2001).  If fully supported this is moving towards the 2T (3M) concept of  a reclined work position.

The physiotherapist in the check shirt is sitting forward on his seat in order to extend his hips slightly.    The table is too low for him and so he loses this advantage as he has to  bend down towards the table top.  In Wilke’s study bending forward about 20° with straight back and without arm support increased the pressure to 0.63 MPa up to 0.83 MPa, which was reduced  to 0.43 MPa

when the elbows were supported.   The physiotherapist in the striped shirt has adopted  an extended position as he is able to brace himself with his arms.  This has the added advantage of forward rotation of the pelvis and so protection of the disc wedge angle. A work position, of this sort, was found to be the commonest (52%) in the quick study (below).   In the next picture I am seen using a stool shaped like a saddle.   My hips are extended but this advantage is lost as the table is too low.  A saddle seat becomes uncomfortable due to localised IT pressure. This happens less with the equestrian saddle due to movement.

A pilot study, in 2013, of how we sit now by students, at Cambridge, working on a project for a 2Tilt chair in relation to desk interface  and office space indicates results, from a nearby office, that might surprise some people.   This was occasioned by the somewhat confused results of intradiscal pressure studies where there is a variation in sitting positions and units used and is also relevant to the single pMRI study (Smith 2006).  A more complete study is required. 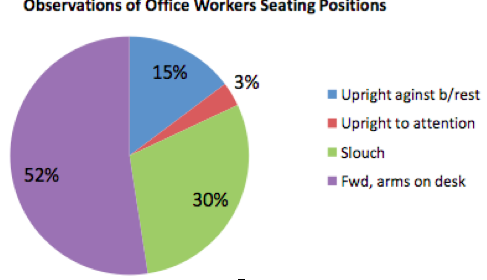 Note that in the absence of reclined work chairs only15% + 3% were sitting upright.

Another reprehensible posture –  or is it?

The popular slouched or slumped posture when sitting in an upright chair looks very wrong if  the misconceived ‘correct’ sitting posture, as excoriated by Mandal, and confirmed by the correct ‘preserve the lumbar lordosis’ dictum is accepted,   It is assumed that this posture will cause LBP if without support at the lumbo-sacral level. This may be true for Western societies where children have been universally accustomed to sit in ergonomically unsuitable upright chairs. This is an oversimplification when non-western sitting is taken into account. 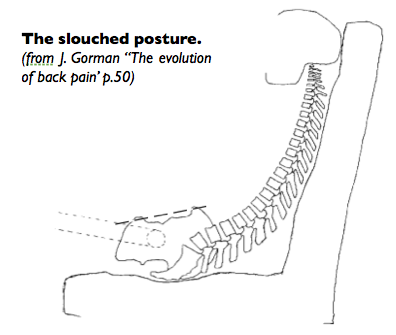 The diagram shows that the flexion occurs at the upper lumbar joints with normal, or increased up to 40°, kyphosis of the thoracic spine. The pelvis lies fully on the surface of the seat and cannot tilt backwards.  The two lower lumbar joints, where IV Disc derangement typically occurs,  are safe if the wedge angles preserved.   The position is not very different from that in a semi-reclined chair.   In the 2Tilt (3M) version emphasis is placed on correct support from head to feet, with a slight degree of iliac support to prevent sagging at the lumbo sacral junction.  Wilke  found the L4/5 intradiscal pressure to be 0.27 MPa against  0.45 to 0.50 MPa when sitting upright (Wilke 2001).

The modern epidemic of backache is associated with lack of exercise and, In spite of uncertain epidemiological  evidence, prolonged upright sitting in chairs.    This is a relatively modern habit.    High backed chairs were an article of state and dignity.    Even monarchs used their thrones for limited and specific events.  Most people sat or squatted on the floor in various ways, which were culturally determined, and  benches and stools were the ordinary seats of everyday life.   It was in the 16th c. that the chair ceased to be a privilege, and became a standard item of furniture for anyone who could afford to buy one and the chair speedily came into general use and that is how we sit now.

Joint stool. These were made in large quantities in the 16th and 17th centuries. They were the most common form of seating before chairs became universal.  Users tend to perch with hips extended as recommended by Mandal.  People did not seem to be bothered much by backache. They were erroneously called ‘coffin stools’ in the 19th century.    Shown are two late 17th c. models.

Next see ☛ How other people sit→

See also a lighthearted account of the Victorian office. which also includes an account and treatment of RSI (WRULD). 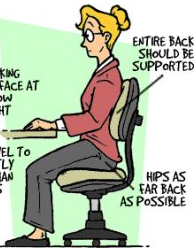