This lighthearted effusion, in European Office health & safety (EurOhs), enjoyed a certain success and many comments.  Somewhat dated, many of it’s views were new back in 2003.

Unexpectedly, it is found that this has a certain resonance with the Sit & Stand concept.

Having avoided cholera and other enterics, once we had arrived at our Dickensian workplace we would have found that illumination would have been by full spectrum polarised daylight. This would have given us a 20% stress free advantage over our 21st century contemporaries who are still using conventional narrow spectrum fluorescent tubes with a flicker at 52 cycles/sec emitting a high level.of glare (veiled reflection). As dusk set in we would have returned home to our family or a riotous evening at the local hostelry. If daylight was too short we would have a candle with reflectors. I have one of these and they are perfectly adequate and there is certainly no glare although I would not recommend them for modern use in the ordinary way.

Our heating would have been by coal fire. These, in case you have forgotten, were cosy and comfortable and keep you active by need for attention. They provide ventilation by drawing in fresh air through cracks around the windows and doors. Further adjustment was by opening the aforesaid. The air movement seemed to address humidity. Of course coal fires raised the outside large size particulate count and S02 which blackened the buildings and had the Darwinian effect of killing a large number of the elderly and infirm when there was an inversion. The London fog was famous and actually romantic and loved by the young. Indoors there was no problem apart from some extra dusting and a raised particle count from the ingress of ambient air. These particles were mainly large and not the more deadly small particles (>0.54 microns) which are present in modern offices. Most air conditioning systems do not filter out these small particles which are derived from outside traffic emissions, power stations, industrial processors, and inside from printer inks and toners and small carbon particles. These last are derived from shed squame (skin) cells which are cooked down by the high tension circuitry in VDUs. Each person sheds about 2 kilos a year amounting to over a ton in an office of 100 people. These particles account for 80% of airborne particles in an office or home and have the ability to absorb and concentrate VOCs, another pollutant which affects modern mankind. The effect of these is carcinogenic and exacerbates Chronic Pulmonary Obstructive Disease (CPOD) particularly asthma. Our forebears would have avoided all of these problems.

In our early Victorian office, the clerks would probably be sitting on a high stool at a high desk. This is easy to step down from in order to stoke the fire, run errands, find papers and generally keep active. He will not be stuck immobile for long periods in a low chair which has considerable demerits for the spine and venous return. He will be sitting perched forward with his legs tucked under him with feet resting on a crossbar. This position allows the flexion angle of the hips to open up and the pelvis to tilt forward which results in lumbar spinal lordosis (extension). The lordotic position is the natural posture that the spine adopts when standing There are no records suggesting that he was plagued by Low Back Pain as are our modern contemporaries who have to sit for prolonged periods in ergonomically inappropriate chairs. To make matters worse in the modern office the desk may not be adjusted to the height of the chair or the occupant as is required by the recent EU regulations.

Our clerk could suffer from RSI – or more terminologically exact, Work Related Upper Limb Disorder (WRULD). It would have been called ‘writers cramp’ having previously been described in 1713 as “scriveners palsy’ by Bernadino Ramazzini who is credited as the founder of occupational medicine. In 1892 the neurologist Sir William Gowers described the condition as an ‘occupational neurosis’ and Professor David Ferguson of the University of Sidney went further to describe the Australian epidemic of 1984/85 as a “complex psychosocial phenomenon with elements of mass hysteria, which were superimposed on a basis of widespread discomfort, fatigue and morbidity”. This view was reinforced by Barton et al in a report on behalf of the British Orthopaedic Association submitted to the Industrial Injuries Advisory Council in 1990. The current critical view has changed in that certain specific anatomically localised lesion such as tenosynovitis of various tendons around the wrist, carpal tunnel syndrome and epicondylitis, of either the ‘tennis’ or ‘golfers’ variety, can be work related as well as the less certain ‘regional pain syndromes’ which are of complex neuropathic origin.

This latter group is unimaginatively described as ‘WRULD Type 2′ and is recognised as having a psycho social dimension and related to work stress. To this we will return.

Empirically it has been found that optimum remediation results in the indoor environment being made to approximate to an equable outdoor temperate environment. Lighting must either be by suitably adjusted daylight or by full spectrum polarised light which is nearly equivalent to daylight. Savannah and mountain top air is relatively free of pathogenic microbe, and certainly VOCs. In an office environment it is found that installation of HEPA filtration and negative ionisation results in reduced sickness and an increased sense of well being which is translated into increased productivity. This system has the added advantage of eliminating the small airborne particles. As mentioned, these are a product of industrial civilisation and they can be borne over large distances, including national boundaries, remediation cannot be effected by relocating to a ‘green field’ site. Another physiological stressor are the sounds produced by modern office machinery. These are of a type that are interpreted by our primitive brain as alarm signals and so, although discounted by our modern brain, act as stressors.

The aforementioned can be easily remediated as indicated. The cost is not great and will be recouped in 1-2 years by increased levels of productivity. An unexpected finding in the optimised office is that measurable stress levels are reduced. It would seem that removing the physiological stressors enables the individual to cope with the psychological stress that effects most people under modern working conditions.

The musclo-skeletal disorders which are so common in recent times are partly due to lack of exercise as well as to the production of artefacts to enable work to be done in an unphysiological sitting posture. This simply did not pertain to our Cro-Magnon ancestors. As an Orthopaedic Physician a large part of my work consists of dealing with spinal disorders and I would endorse Mandals conclusion that “without the slightest regard for man’s actual anatomy, a new human form has been contrived to fit the available furniture.” To which it could be added that chair designers and manufacturers continue, with great ingenuity, to make chairs to this design. The new design of chair incorporating iliac (or pelvic) support rather than ‘lumbar’ support is an advance, but we need to go further, with a fresh rethink, if our occupation continues to require prolonged sitting. Desking has to be considered in relation to the person sitting in the chair and the height of the chair adjustment. Variable desk height adjustment is therefore a minimal requirement. A new generation of desks is slowly coming on to the market which take into account the need for wrist support as well as easily accessed communications and even a localised optimum environment!

As for RSI (OK, lets use the outdated terminology; everyone else does), a two prong approach is necessary. Firstly the ergonomic factors have to be corrected such as workstation layout, well designed tools, positioning and wrist supports as well as breaks for alternative activities (a computer programme called ‘Workpace’ is useful here). Secondly, as mentioned, psychosocial factors are paramount in the WRULD Type 2 condition. Interestingly, it has been found that in an environmentally optimised office not only are the obvious morbidity rates reduced but that also stress related symptoms largely disappear. This suggests that as the physiological stress is reduced the worker can manage their own psychological stresses. This is very relevant to the psychosocial aetiology of the WRULD Type 2. Finally it must be emphasised that RSI is a potentially serious condition in that it can permanently curtail the continuance of a career. The problem must be recognised early and steps taken to remedy any ergonomic and environmental cause. To be successful Type I treatment must also be undertaken early by someone trained in the treatment of soft tissue injuries. At a later stage, Type 2 treatment is often surprisingly complex and requires a ‘pain clinic’ approach. 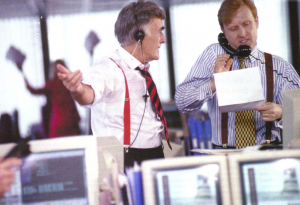 To conclude, a healthy office environment is one that approximates to the equitable outdoor environment for which Homo Sapiens was developed by natural selection. The further we depart from this the greater the morbidity levels rise.

Points for this article were taken from :- 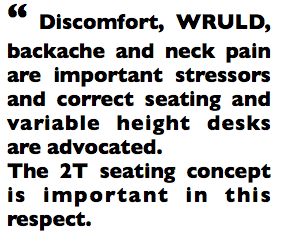