Spinal configuration of the intervertebral disc angles at the lumbar-sacral junction was developed as a result of hominins adopting an upright (orthograde) stance for efficient bipedalism.   The IV Disc angle is important for preventing pathology and is determined by the overall spinal configurationas as lordosis is protective at the vulnerable lumbar-sacral junction .

The  IV Disc angle and its importance.

The lordotic wedging (IV Disc angle) of the Inter-Vertebral Discs (IVD) have an important function in protecting the discs ((Cyriax JH. 1946 Harrison DD 1998 )  in preventing retropulsion of the disc contents.    This is compromised by some sitting positions. 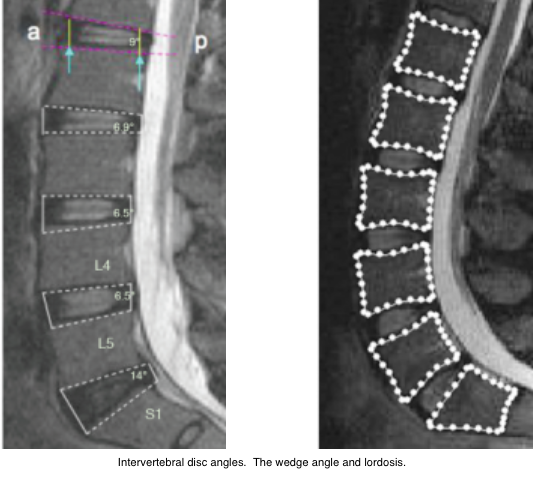 This effect is clearly shown on pMRI scanning.   The wedge angles of IV discs are shown outlined in white on the pMRI scan  (left). (Francis W. Smith et al.)   They are measured more accurately by the shape system used by Meakin et al, shown (right) with dotted  outlines.

In lumbar flexion (left) shows posterior nuclear shift of the nuclear disc contents.  In lordotic extension (right) the nucleus is in the safe mid position.

The  joints at risk of breakdown are the lower lumbar (L4/5, L5/S1 & to a lesser extent L3/4).   Approximately two-thirds of total lumbar lordosis occurs at the inferior two segments (L4-L5-S1). The total and segmental lumbar lordosis at L4-L5 significantly decreases with age.  As explained these mobile joints are under greater mechanical stress as they adjoin the fused sacral joints which form the posterior wall of the mass of the pelvis.   Having a greater wedge angle than the upper joints, it is likely that this has a protective function which would be lessened if this angle be reduced so that the disc surfaces become parallel or if the wedge is reversed.

The Lumbo-sacral disc angles in sedentary groups liable & not liable to LBP.

Gorman JD reviewing  the x-rays from work by (Pearcy et al.) noted that in the cohort of 11 non- LBP sufferers, a  sedentary group who had not experienced backache in the previous twelve months the standing mean wedge angles were 18° at L5/S1 increasing to 23° with extension.  At L4/5 the mean wedge angle was 16°. 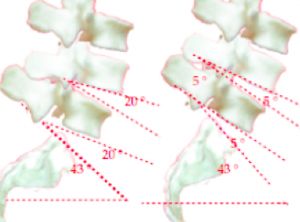 Note that in this group the wedge angles (Left , in extension) in full flexion (Right)  was preserved although reduced.   Loss of this effect is what is likely to result in joint breakdown, including IV Disc prolapse.   This effect is shown on pMRI scan

. This study suggests that bipedalism requires a high wedge angle for protection of the lower lumbar discs (IVDs).  Individuals who do not have a tendency for LBP preserve the low lumbar disc wedge angles even when the spine is flexed.  It has been suggested that they may not have used upright chairs when young.   People who are liable to LBP, some 70% of the UK population, do not have this ability to preserve the wedge angle on spinal flexion and the angle may even become 0° or reversed, resulting in retropulsion of the nucleus of the disk towards sensitive structures.

The wedge angles depend on the configuration  of the lower lumbar joints which has been extensively studied and are relevant to chair design. 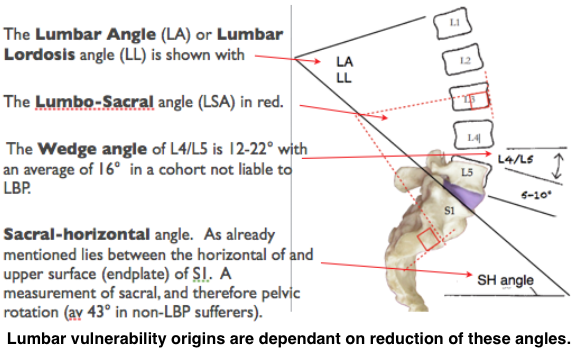 Note, in the diagram above, that the upper surface of S1 forms part of both the Sacral horizontal angle and the wedge angle of L5/S1.  The tilt of the pelvis therefore modifies L5/S1 angle.  Upright sitting effects the configuration and reduces the wedge angles. 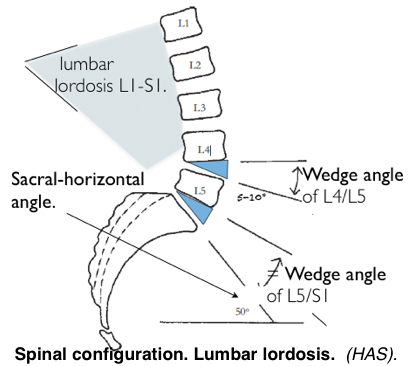 A new method of calculating  LA from skeletal remains, based on vertebral body wedge angle and the articular process angles, has enabled a study of LA of extinct pre-human and hominin individuals (Been et al., 2010).  Although complicated and with a lack of numbers of extinct forms, it gives a good account of the development of the LA related to bipedalism.

The morphological trend showed the LA jumping from the primitive condition seen in modern apes (22.1°+/- 3.4) to the more human-like LA of early hominoids such as the australopithecines (41° +/_  5)  and hominins such as H. erectus (45°) and then slowly to fossil  H. sapiens (54°8 +/- 14) and modern humans  (51.1° +/-11.0) .  The reduction of the LA in modern humans, at 51.1° from 54°8, who probably sat in chairs since childhood, compared to their extinct Cro-Magnon ancestors, who probably didn’t, might suggest that sitting in chairs has an effect.   The odd ones out are the Neanderthals who show a reversal  with a decreased lordosis (29° +/- 5) when compared with other hominins. with the possible exception of hominins from Sima de los Huesos, who are potentially Neanderthal ancestors. The reduced lordosis of Neanderthals suggests a slightly different gait.  Although having greater body mass and strength, being slower, the reduced LA might imply a reduced LSA or  lumbo-sacral wedge angle with a possibly  increased  liability to LBP and disc protrusion. which might have hastened their demise in the confrontation with H. sap.      The centre of gravity lies further forward later in pregnancy In humans, so that a more pronounced lordosis is required.

More specifically localised to the lumbar-sacral junction which accounts for most of the LA is the Lumbo-sacral angle (LSA) which was used by Abitbol  (Abitbol 1987)  in the study of the phylogenic & ontogenic development of lordosis. 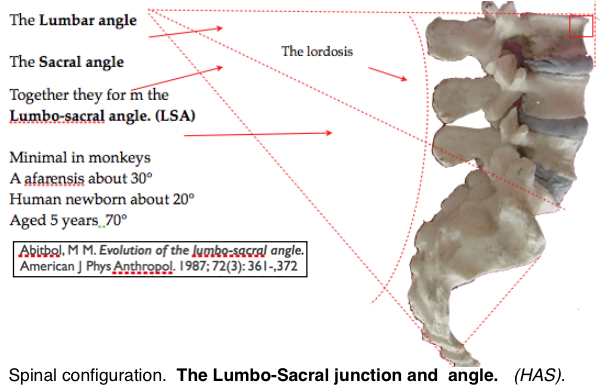 The angle is almost nil in non-erect mammals and only slight in monkeys becoming greater in primates which assume an occasional upright stance and bipedal behaviour. It is much greater, about 30˙, in the early hominids.   The angle includes slight wedging of the lower discs  and, to a lesser extent, the vertebral bodies by 5-10°.  This ‘wedge angle’ has an important protective mechanical effect in preventing posterior prolapse of disc components.   In modern humans the LSA is between 70° to  90°.   At birth the angle is about 20° increasing, as the infant assumes the erect posture and  begins to walk, to about 70° at the age of 5 years.

Next consider the Sacral-horizontal angle which indicates the tilt of the pelvis. 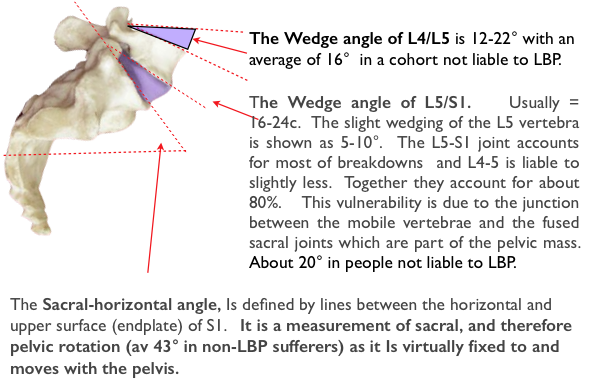 This was used by Pearcy in Xray measurements of a cohort of 11 with no, or low,  incidence of LBP.  This showed a variation between 22-70° and determines the wedge angles of the lower two discs.  The angles being greater than those usually shown in textbooks & journals (Pearcy et al.).  Measurements from this study were further researched by JD Gorman (51).  who, based also on the work of Lovejoy (Tague,  Lovejoy 198652, 53,)  postulated that as the large brained later hominins emerged a larger pelvic birth canal was required.   This was achieved by development of a greater  sacral-horizontal angle which had the effect of increasing the wedge angles of the lowest 2 IV discs and lordosis in additional to the lordosis of early bipedalism.          To see Gorman’s account→

Lumbar vulnerability to breakdown at the lumbo-sacral junction originates in the prehistory of the modern and earlier hominins.  Recent changes in human behaviour patterns may have submitted the spine to strains for which it was not developed resulting in increase of the incidence of back pain (LBP)

The mammalian spine, in it’s various forms, by natural selection has become a beautifully efficient structure.  This has been effected by compromise for often incompatible functions.

The adoption of the inherently unstable upright orthograde posture allowed :-

Bipedalism began about 7-5 million years ago (MYA) with the advent of the  Hominidae family, which included ancient forms of  modern orangutans, gorillas and chimpanzees and their extinct

relatives such as Ardipithecus  and  Australopithecus and far down the line, towards modernity, to include humans.  Early hominids were originally arboreal, tree living, creatures that began to walk upright along branches and occasionally on land.  The basic adaption of bipedalism was well advanced in Africa about 3-4 million years ago (MYA). Climate change had replaced the jungle habitat to arid grassland and small shrub Savannah and the Australopethecines were advantaged by  exchanging an arboreal for a  mainly terrestrial lifestyle and development of an upright stance and bipedal gait similar  to that of humans.   The morphological changes are well illustrated by the Australopithecine group, typified by A afarensis and one individual, “Lucy” (or officially Al 288-1), who lived in North East Africa.

Bipedalism and the lumbo-sacral junction

Anthropoid apes have a straight spine and the torso weight lies anterior to the centre of gravity,   Loading can be brought further back by flexion of the hips and knees, described as   ‘Bent Hips/Bent Knees’  (BHBK, gait)  is required For an upright stance.  This incurs higher energy requirements and a slower gait. Simulation of BHBK walking by humans increases energy consumption by 50%. This is because 80% of energy is conserved by the exchange of potential for kinetic energy by the rising and falling of the centre of gravity.

Bipedalism requires anatomical changes so that the torso can remain balanced upright for most activities and there is an ability to stride forward with the swinging gait which is characteristically human.  This requires the lumbar and cervical spine to be extended in a lordotic configuration so that the axial load of the body is directed down to the ground in a near straight line when standing.   The head, specifically the foramen magnum, is balanced vertically over the plane of the hip joints, in males, and the point of contact of the foot with the ground. This has been achieved by pelvic rotation to enable the hips and knees to straighten.  These lordotic angles and the pelvic rotation are  measurable.

Anatomically, an upright (orthograde) posture and Bipedalism results in :-

Bipedal rats and others

Hominids are the only known creatures which are truly bipedal and able to adopt our swinging gait apart possibly wingless birds, such as the ostrich, which are evolved from bipedal dinosaurs. The upright posture occurs in other animals but is usually for short periods and an examination of the skeleton, for example in the penguin, shows a different arrangement with only an analogous appearance of bipedalism.  Performing Japanese monkeys (Macaca fuscata).  can be trained to adopt an upright posture resulting in lumbar lordosis and bipedalism.  Over time some bone remodelling occurs.   However energy expenditure is higher than when plantigrade and they revert to this posture when retired from performing (Nakatsukas 2004).  Slijper, in 1942, gave a detailed account of the changes in the skeleton of a phocomelic goat that had  been born without forelegs. The spine and pelvis had been remodeled with changes suggestive of those found in bipedal

animals.   Rats have been shown (Cassidy 1968) to adopt a bipedal stance and gait if their forelegs are amputated at birth. Their ability to function is remarkable. Their posture and locomotion are surprisingly similar to that of humans and provides the nearest animal model to the human bio-mechanical condition at the lumbar spine. The lumbar spine adapts by becoming lordotic and approximates to that of the human spine and there are changes in the muscles acting around the pelvis. It can be shown that there is increased axial loading on the lumbar spine and a high proportion of these rats develop back disorders which are usually, almost uniquely, only found in humans. These include degenerative changes, disc protrusion, facet joint degeneration and spinal stenosis.