Effect of sitting for prolonged periods.

Sitting for prolonged periods  is obvious to most patients and clinicians who treat them  as an association with LBP with and results in a high reporting of LBP by sedentary workers and was recognised in the early work as a risk factor (Bendix 1994).    Sitting in the ordinary way is not associated with spinal pathology unless prolonged for about half a workday (Lis AM, 2007) and a higher  prevalence rate has also been reported in those occupations that require the worker to sit for the majority of a working day and is significantly higher than the prevalence rate of the general population (Papageorgiou 1975) particularly among those aged 35 years and older who have had sedentary jobs for several years (Kelsey JL. 1971) and if combined with  awkward postures or Whole Body Vibration (Lings S, 2000)  which occurs with driving a car (Kelsey 1975), tractor or, worst, a helicopter.  This association was refuted in a later study with 45 pairs of identical twins (Battie et al., 2002).

It is not a general view but long-term, low-level chronic stressors that occur with prolonged sitting (Wood and McLeich, 1974.)  may be as important as acute impact forces such as falls and lifting strains of heavy manual work.   Sitting for more than 6 hours daily increases mortality by 37% for females and 17% for men. The gender difference is unexplained (Patel.2013).

There is a strong presumption that prolonged sitting in adverse ergonomic circumstances, especially in childhood, is fundamental to the explosive rise in the prevalence and incidence of spinal pathology and LBP.   Demographic studies to determine differences in the incidence of LBP in populations that use Western style upright chairs and other ‘natural’ styles of sitting suggest the adverse effect of the former. Non-Western peoples, who do not use chairs, tend to have a low incidence of LBP.    In Japan, this increases as elements of the population adopt chairs (Schlemper7).

The bio-mechanical evidence shows that conventional mid upright sitting causes backward tilting of the pelvis resulting in reduction, or even reversal, of the protective disc wedge angles at the lowest 2 lumbar joints (L4/5 & L5/S1) where mechanical spinal breakdown is commonest.  This effect is augmented by lumbar support directed to above the L5 vertebra (Gorman ).  The predicted effect is retropulsion of the disc contents (NP) and is confirmed by pMRI studies (Smith, 2006).    Posterior disc protrusion was put forward by Cyriax (1945) as the main cause of backache and later posterior structures of the motion segment, Zygapophyseal (facet) joints and ligaments have also been shown to be involved in pain production (See Anatomy/nerve supply). Irreversable stretching of the lumbo-sacral and supraspinous ligaments can result in pain and joint instability leading to CTD and earlier degeneration (see Anatomy/Ligaments).This has not been confirmed by epidemiological studies.    A study by the US Department of Health and Human Resources (NIOSH 1997) reviewed a number of factors and the general conclusions seem to suggest that the evidence was contradictory and confusing. There was an emphasis on non-physical psycho-social factors and heavy load handling.   Much of the research into the causation of spinal breakdown has concentrated on violent or inappropriate spinal usage afflicting manual workers today and evidence is shown in skeletons from the prehistoric past.

An investigation using Whole-body Positional MRI (pMRI), by FW. Smith, Bashir W (2007) who found that the upright position, at 90°, caused disc contents to move the most, while the relaxed position (135°/45° reclined) caused disc contents to move the least. This confirms that the upright position is the worst for the back, while the relaxed position is the best.

The above effect has been shown incontrovertibly to occur by pMRI scans (Smith FE 2006).  From  which the following pictures are derived (arrows, etc, are added).  This confirms the bio-mechanical evidence.

pMRI scan in reclined, relaxed, sitting mode shows the NP in a safe mid-position.  The hip angle is at 135°.    the NP is in the safe  mid-position.   This is practical and preferable and is advocated for the 2Tilt principle in the reclined mode.

pMRI scan in an upright sitting mode shows the NP has translated posteriorly which can culminate in protrusion.   Hips are at an angle of 90° with the seat-pan horizontal.

This is visual confirmation of the bio-mechanical evidence.

Adams et al. (1980) showed that the supraspinous-interspinous ligaments segments are the first ligamentous tissues to become stressed with forward bending of the lumbar spine.

Thus, the disc is capable of withstanding the large compressive forces that result from muscular recruitment. Hutton and Adams (1982) found that cadaver discs from males between the ages of 22 and 46 could, on average, withstand single loads of over 10,000 N before failure occurred. In most cases, the failure was in the thin bony membrane that forms the boundary between the disc and the vertebral body (vertebral endplate) rather than through nuclear prolapse. Since the disc is an avascular structure, the health of the endplate is critical for nutrient exchange, and even small failures may hasten the degenerative process.

Researchers have found that prolapsed discs occurred more frequently when the vertebral segments were wedged to simulate extreme forward bending of the spine (Adams and Hutton, 1982). In this position, the anterior portion of the annulus fibrosis undergoes compression while the posterior portion is under tensile stress. Over 40 percent of the cadaver discs tested by Adams and Hutton (1982) prolapsed when tested in this hyperflex posture, and with an average of only 5,400 N of compression force applied. This finding shows that the disc is particularly susceptible to bending stresses. In a later study in which Adams and Hutton (1985) simulated repetitive loading of the disc, previously healthy discs failed at 3,800 N, again mostly through trabecular fractures of the vertebral bodies. Taken together, these studies show that the disc, especially the vertebral endplate, is susceptible to damage when loading is repetitive or when exposed to large compressive forces while in a severely flexed posture.

From a biomechanical perspective, co-contraction is a way in which joints can be stiffened, stabilized, and moved in a well-controlled manner. Cocontraction, however, also has the potential to substantially increase the mechanical loads (compression, shear, or torsion) or change the nature of the loads placed on the body’s articulations during an exertion or motion. This is because any co-contraction of fully or partially antagonistic muscles requires increased activation of the agonistic muscles responsible for generating or resisting the desired external load. Thus, the co-contraction increases the joint loading first by the antagonistic force, and second by the additional agonist force required to overcome this antagonistic force. Therefore, work activities in which co-contraction is more common impose greater loads on the tissues of the musculoskeletal system.

Several studies have also shown how sciatic pain can be associated with mechanical stimulation of spine structures. Moderate pressure on the dorsal root ganglia resulted in vigorous and long-lasting excitatory discharges that would explain sciatica. In addition, sciatica could be explained by excitation of dorsal root fibers when the ganglia were exposed to the nucleus pulposus. Excitation and loss of nerve function in nerve roots exposed to phospholipase A2 could also explain sciatica (Cavanaugh et al., 1997; Chen et al., 1997; Ozaktay, Kallakuri, and Cavanaugh, 1998). Finally, the sacroiliac joint has also been shown to be a significant, yet poorly understood source of low back pain (Schwarzer, Aprill, and Bogduk, 1995). Hence, these studies clearly show that there is a logical and well demonstrated rationale to expect that mechanical stimulation of the spinal structures can lead to low back pain perception and reporting. How these relate operationally to clinical syndromes is less certain. 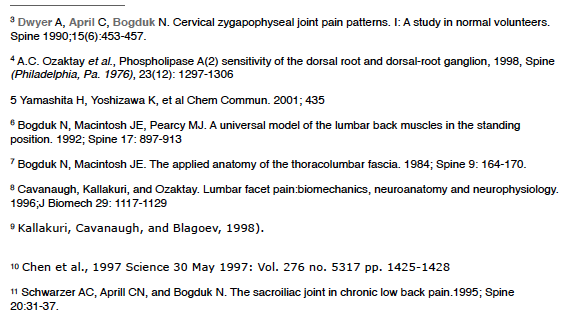