There is some confusion on the extent and role of spinal compression.

Early in vitro loading studies (Jayson, 1975) showed little or no effect on intact discs in the young.  In most cases, failure occurred in the vertebral endplate rather than by nuclear (NP) prolapse.  Cadaveric discs from males between the ages of 22 and 46 could, on average, withstand single loads of over 10,000 N before failure occurred (Adams AC and Hutton 1982).     When hyper flexed in vitro discs prolapsed at an average of only 5,400 N instead of 10,000 N  (Adam et al.2002).

Rather than through peripheral nuclear prolapse, in most cases, the failure was in the vertebral endplate, resulting in Schmorl’s nodes.   Since the disc is a largely avascular structure, the health of the endplate is critical for nutrient exchange, and even small failures may hasten the degenerative process.

Loading studies, in vivo by direct measurement, in addition to degeneration and joint flexion,  is complicated and fraught with variations in the state of the disc, neuromuscular activity, facet joint load, ligamentous laxity or  tension.  However all show Intra Discal Pressure (IDP) to be lower in the reclined posture than with mid-upright sitting. IDP studies were pioneered  by Nachemson  (Nachemson A. 1964) who   showed that intradiscal pressure (IDP) to be 500-800 N  for a 75 Kg man, while standing,  Sitting  IDP was higher.

Later work by others contradicted this and reported near identical pressures for both sitting or standing, being approximately 0.30 MPa (Schultz , 1982). 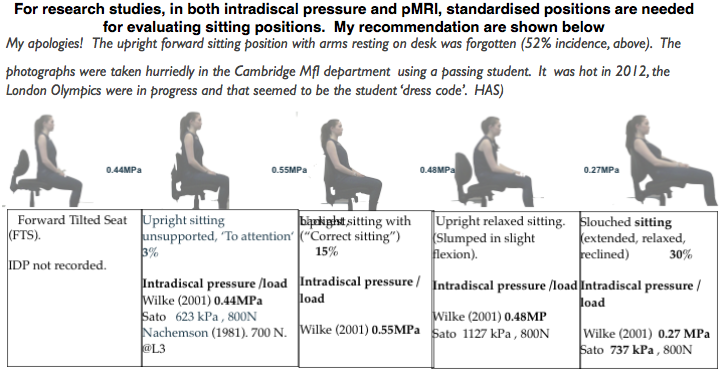 Considerations on the later studies on intradiscal pressures.

Studies, from Japan, Sato  (Sato et al., 1999), using a piezoresistive sensor in the transducer needle detecting the pressure laterally at a window and not at the needle tip, confirmed the pioneering findings of Nachemson and examining the changes in the more relevant L4/5 disc rather than the L3/4.

More recent works differ from that of Nachemson and Sato in that pressure on sitting upright is similar or only slightly more than when standing.  As subjects without LBP or radiological evidence of degeneration were used, this has little relevance to the effect of IDP on discogenic effects.

To assess the biomechanical factors involved in the protection of the vulnerable lumbo-sacral junction, knowledge is required of :-

Other views on discogenic pathogenesis

Garun Garg at NIOSH  concluded that intradiscal pressure alone  as a risk factor is minimal at best. Protrusion can occur at low IDPs (Kumar, S. (1998, 2001).   The subject was reviewed in Australia (Clause Hides 2008), and concluded “If sitting is a greater threat for development of low back pain than standing, the mechanism is unlikely to be raised IDP.”  but mainly quoting sources confined to studies on intact discs.

Next ☛Intervertebral disc angles and the lumbar-sacral junction.→ 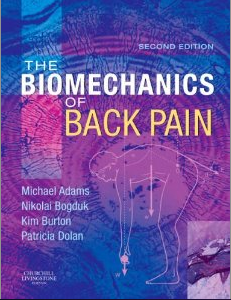 Wilke et al. A novel approach to determine trunk muscle forces during flexion and extension: A comparison of data from an in vitro experiment and in vivo measurements .2003;Spine, 28(23):2585-2593.