The bio-mechanical factors and their effects that may determine spinal pathology and lead to backache (Low Back Pain. LBP & further pathology) are discussed. 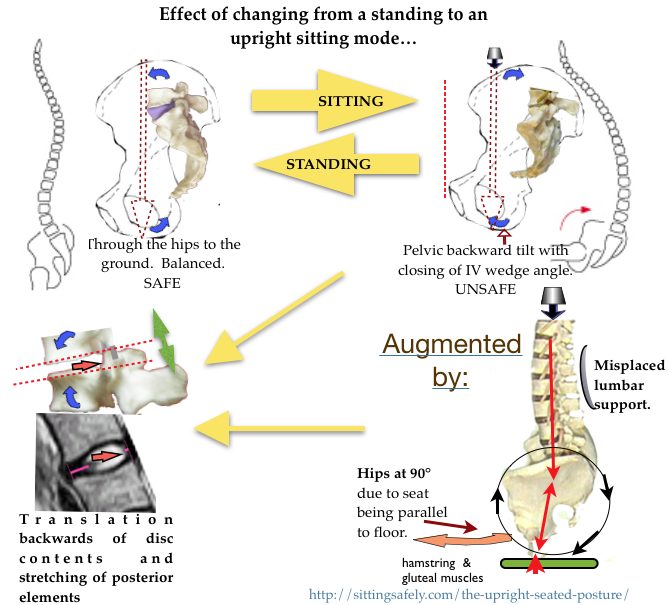 to IV Disc pathology at the joints of the lumbar-sacral junction (L3/4, L4/5, L5/S1) is reduction of the L/S joint angle resulting in posterior movement of the intervertebral disc (IVD) contents and can be seen, on pMRI scan (Smith F 2006).    This retropulsion of disc contents can progress to protrusion and extrusion (see ☛The intervertebral disc→).   Also CTD→

The intra-discal pressure is augmented In the flexed position, largely due to tension of the posterior ligaments,  while the anterior portion of the annulus fibrosis (AF) undergoes compression   In full flexion this can be as much as 100%.   The pressure gradient increases anteriorly,   tending to retropulsion of the nucleus pulposus (NP). 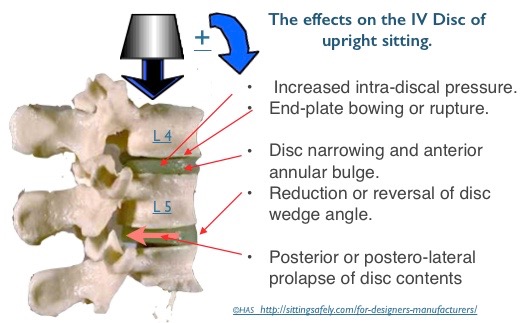 Disc prolapse  occurred more frequently when the vertebral segments were wedged to simulate extreme forward bending of the spine (Adams and Hutton, 1982). In this position, the anterior portion of the annulus fibrosis undergoes compression while the posterior portion is under tensile stress. Over 40% of the cadaver discs tested by Adams and Hutton (1982) prolapsed when tested in this hyper flexed posture, and with an average of only 5,400 N of compression force applied. This finding shows that the disc is particularly susceptible to bending stresses. In a later study in which Adams and Hutton (1985) simulated repetitive loading of the disc, previously healthy discs failed at 3,800 N, again mostly through trabecular fractures of the vertebral bodies. Taken together, these studies show that the disc, especially the vertebral endplate, is susceptible to damage when loading is repetitive or when exposed to large compressive forces while in a severely flexed posture.

When sitting there is backward tilting (anat; forward rotation) of the pelvis, which reduces or reverses the protective wedge angle of the lower lumbar joints  ☛(See Lumbar & spinal support→). 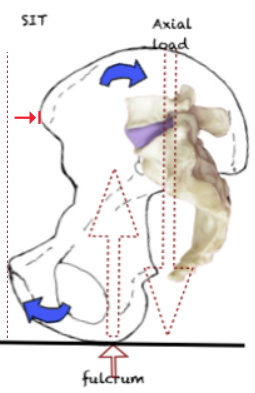 ←Flexion  The axial loading force comes to lie posterior to the pivot point at the Ischial Tuberosities. A backward turning movement results in backward tilt in of the pelvis.

The adverse effects have been long and variously described     Prolonged constrained static postures are uncomfortable and deleterious for both spinal and general health.   ☛Importance of MOVEMENT→.  Recently there has been interest in continuous small amplitude movement for upright chairs, the chair re-aligning with the users centre of gravity,  and termed  ‘Dynamic Seating’.     Exercise is required to maintain this position. This provides proprioceptive feedback and frequent small amplitude pressure changes which may be comforting for short periods and helps multifidus muscle action. Rani  Lueder  gives a review account (Lueder R 2002) and the referenced evidence→is considerable. 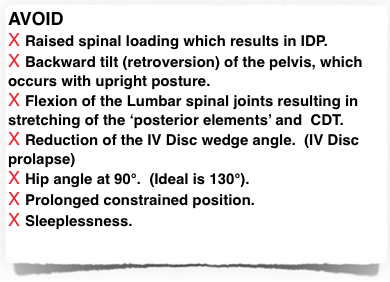 The mid-upright mode is the worst possible position. How did it happen?   ☛ Why? Mandal explains→

The upright seat  is still recommended….Some of these diagrams suggest that iliac back support is incorporated.  This is a partial solution providing it is correctly configured. See ☛ Lumbar support→

An investigation using Whole-body Positional MRI (pMRI), by FW. Smith, Bashir W (2007) who found that the upright position, at 90°, caused disc contents to move the most, while the relaxed position (135°/45° reclined) caused disc contents to move the least. This confirms that the upright position is the worst for the back, while the relaxed position is the best.   See  Positional MRI →