Spinal Ligaments connect the vertebrae and play an important part in providing the stability of the spine and protection of the disc.   Adams et al. (1980) showed that the supraspinous-interspinous ligaments segments are the first ligamentous tissues to become stressed with forward bending of the lumbar spine.

A number of midline vertical spinal ligaments lie posteriorly to the lumbar joints.  Their function is to limit excessive flexion, and other, movement  (but vide infra).  They can also give rise to pain and, being visco-elastic, can be permanently lengthened by stretch. 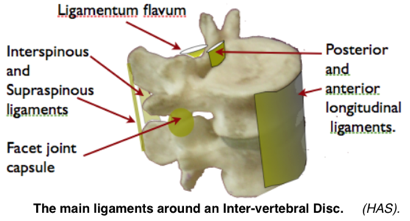 It is possible that ligament stretching in childhood leading to joint instability may be an associated cause of IV Disc degeneration and fundamental to the epidemic of adult spinal breakdown.

The Interspinous ligament is  a thin septum between borders of each adjacent spinous process. Fibres  fan out in an antero-caudal direction at an angle of about 20˚ to the horizontal32. Tension imposes an anterior shear force on the disc.  This arrangement may also ‘even out’ the flexion ranges at each of the spinal joints (Gorman. 1987) .  Stretching  plays a part in the inhibition of the multifidus muscles (Solomonov 1999).

Supraspinous ligaments are formed from the midline element of the lumbo-dorsal fascia (Thoraco-lumbar fascia, TLF).  Strong and cord like, they connect the tips of each spinous process becoming taut at extreme of, and limit, lumbar flexion.        They  are the first structure to fail, at extreme flexion (Rissanen PM 1960) (Adams, Hutton 1980) and are richly supplied with nociceptive (pain)  small nerve fibres.  However, they don’t extend beyond L4 to stabilise the important lumbo-sacral junction and are replaced by complex arrangements  of bands of collagen fibres derived from the deep layer of the thoraco-lumbar fascia (Bogduk).  The one  from the tip of the L4 & L5 spinous processes to the posterior superior iliac spine and beyond,the ilio-lumbar ligament, has the greatest offset and so is likely to be the most important in limiting flexion range (Adams, Bogduk 2002).   (NOTE. In my clinical experience this structure was commonly involved in chronic LBP. HAS) 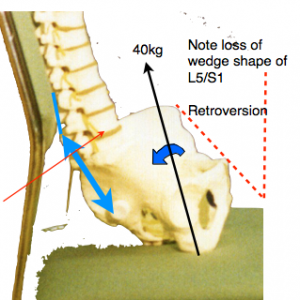 The likely forces that must be resisted by the ilio-lumbar and the supraspinous ligament (shown in blue) when sitting in the usual lumbar support seat, which allows backward tilting of the pelvis, with a bodyweight 40kg (excluding the legs) can be calculated.  Simple moments about the centre of the L5 disk suggests a ligament tension of about 70 kg (700 Newtons).  This is probably a worst-case estimate.   (JD Gorman)

In the early days, working at St Thomas’s, at that time being the low man on the totem pole, it fell to my lot to infiltrate the supraspinous ligaments with a sclerosant solution as a stabilising procedure.  I soon noticed that this could result in unexpected immediate and complete symptomatic relief, the patient walking away rejoicing.  I could identify the indications where this was likely and could postulate that the ligamento-periosteal attachment was the site of the lesion.  This did not go down well with Cyriax who was of the opinion that pain did not originate in spinal ligaments.  I asked him why if pain could arise in any other ligament, “Why not spinal ligaments?”.   “Yes , very odd, but it is so.”    I also noticed that I could identify the top end of the L5/S1 (lumbo-sacral) ligament, a common pain source, but the bottom (sacral) end seemed to have got lost.  This was explained by Bogduk’s account of the anatomy showing that this arrangement is modified at the important L4/5 and L5/S1 levels and, as mentioned,  flat ligaments fan out from these spinous processes to be attached to the iliac crest and sacrum.  providing a broader and stronger caudal attachment (Bogduk 1984) (Heylings 1978).

The Ligamentum flavum  is a strong elastic yellow ligament which connects the adjacent borders of the laminae of the posterior vertebral arch, and with them forms the posterior wall of the spinal canal. It protects the neural elements in the canal (Ramsay 1966).   The ligament may become thickened with degenerative changes and lose its elasticity which may result in kinking which can encroach on the spinal canal  resulting in narrowing (spinal stenosis described by Verbiest).  Doubt  has been expressed as to whether this occurs but I must admit to having myself often seen thickening and kinking at surgery.

Posterior longitudinal ligament. This is important strong and ribbon-like extending the whole length of the spine, forming the anterior wall of the spinal canal.     It is attached to the vertebral bodies and spans the intervertebral discs.   This topography limits posterior protrusion of the disc contents and being weaker or absent laterally, protrusions tend to be directed  postero-laterally where the emerging nerve roots, in their dural sleeve, emerge.  Complete rupture of the ligament allows a dangerous mid-line extrusion of disc contents which threatens the adjacent spinal corda equina (the spinal cord does not extend to the lower lumbar region) in the spinal canal. This can result in nerve root conduction loss and paralysis of the legs and sphincter loss which can be permanent if not relieved by emergency surgery.

Capsule of the facet  (zygapophyseal)  joints

The facet joints are bilateral accessory joints between the articular processes of adjoining vertebral arches    They guide and limit movement provide 39% of the intervertebral joints’ resistance to bending (Adams 1980) and also account for some of the axial loading on the lower part of the spine, especially in excessive lordosis with the transfer of the axial loading from the nucleus (NP) onto the facet joints (Adams 1980, Adams 1981) which can also give rise to pain (Kuslich 1991).  This increases with disc degeneration.  The capsular ligaments can become stretched and the joint can become degenerate and disorganised.   I found the posterior capsule of these joints to be clinically identifiable and easily and effectively treated although trials of transcutaneous electronic nerve stimulation, and facet joint blocks have not reached significance (Jackson RP 1992).

Thoraco-lumbar fascia (TLF, lumbo-sacral fascia)  Simplistically, the TLF acts as an extensor and anti-flexor of the lower lumbar spine (L2-S1).    Consisting of a trilaminar investing fibrous membrane which encloses the trunk ( like a body-stocking) some fibres become condensed to form ligaments and tough tendinous aponeuroses.      The detailed anatomy is complicated.   The superficial layer of the TLF  posterior lamina, through the aponeurosis, gives spinal attachments for the latissimus dorsi muscle and, through the lateral raphe, for the internal oblique abdominal muscle which also has a more direct attachment through the deep layer (of the TLF posterior lamina) to the tips of the spinous processes.   (See below).     The view that ligaments are merely passive restraints on excessive joint movement has to be modified for the spine.  As shown above the TLF mesodermal structures consisting of fascia, aponeurosis, ligament and tendon anatomically blend into each other and subserve similar functions with great complexity.      Intra-abdominal pressure also tenses the TLF (Gracevetsky 1985) and supports a  proportion of the body weight which may be protective in slumped ethnically determined ‘natural’ sitting postures.

Spinal ligament lengthening, which can start in early life, may be postulated as the basic faulty link in the chain that leads to muscle dysfunction, disc degeneration and internal disc disruption (IDD).

In adulthood the stretching of posterior spinal ligaments that occurs during a work period when sitting in spinal flexion does not fully recover before the next session.  This may have a cumulative effect over a day and even over many days, weeks, months and years becoming chronic.   Solomonow, using an in vivo feline model, showed that creep developed in the viscoelastic tissues of the spine, over a series of only three equally long of such static flexion/rest sessions, under a moderate physiological load, did not fully recover during an equally long rest period and accumulated to a value of 52.77%.  Seven hours of rest were not sufficient to allow full recovery of the creep developed during 30 minutes cumulative work, leaving residual creep for the ‘‘next work day’’ (Solomonow et al 2003). Sitting postures, which allow prolonged stretching of the ligaments may lead to permanent lengthening and instability,  an important factor in disc degeneration  (see also, Ischial off-load). It  is particularly relevant to poor posture in childhood (See post, School chairs & desks→).

A 2Tilt (2T) chair in the reclined mode, the the spine is fully and correctly supported , for prolonged work, particularly at the lumbo-sacral junction.   See  2T CONCEPT a full solution→.     This may be an uniquely important factor in the avoidance of CTD.

One thought on “Spinal Ligaments and CTD.”

Rissanen PM. The surgical anatomy and pathology of the supraspinous and interspinous ligaments of the lumbar spine with special reference to ligament ruptures. Acta Ortho Scandinavica (suppl) 46: 1-99, 1960.

56 Kuslich SD, Ulstrom CL, Michael C. The tissue origin of low back pain and sciatica: a report of a pain response to tissue stimulation during operations on the lumbar spine using local anesthesia. 1991; Orthop ClinNorth Am 22: 181-187.