How did it all begin?  A good start is with the pelvis of  A afarensis, an individual known as ‘Lucy’.

Australopethecine bipedalism has resulted in considerable morphological changes to the pelvis when compared to that of other apes.   An australopithecine pelvis. Similar to that of a human. 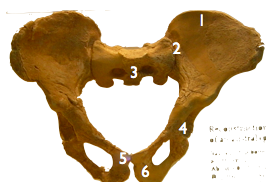 The pelvis of A. afarensis required rotation of the sacrum to increase the Lumbo-sacral wedge angle.   Lucy’s ilium (Togue, Lovejoy 198664) is similar to that of humans,  being short and having widely flared iliac blades. 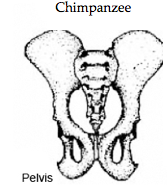 This morphological change is due to the shortening of the pelvic ilium.  The iliac blades are rounder and the outer surface face postero-laterally to give an attachment for the origins of the gluteal muscles.   These therefore have changed their function from hip extensors to become abductors and lateral rotators of the hip.  and are important for stabilising the pelvis on the hip and act to support the weight of the torso at the phase of walking when the contralateral, other leg is off the ground. A failure of this mechanism results in the pelvis tilting downwards away from the affected side and is the basis of the clinical Trendelenberg test. Non-hominid primates, with glutei only acting as hip extensors, therefore have an ambling gait or what doctors would describe as a Trendelenberg gait in a human.

The early hominids, such as Homo erectus, had a brain of 900 cc. and its primitive variant, of 1.8 MYA, found at  the Dmanisi (Georgia) site was only 650-780cc. These were probably the earliest hominids outside of Africa.    H. sapiens, with a volume of about 1300 cc appeared about 130,000 years ago according to the previous ‘out of Africa’ theory’.

Lovejoy (Tague, Lovejoy 1986, 2005) pointed out, that the enlarging human brain (cerebralisation) in the foetal head required morphological changes of the pelvis to allow an adequate birth passage and changes of the lower half of the pelvis, composed of the ischium and pubis.

The shortening of the ilium, an effect of bipedalism, results in the consequent unwanted effect of reducing the antero-posterior (AP) diameter of the pelvis and the size of the birth canal.  Although this was no great problem for early hominins, such as ‘Lucy’, as they had ape sized heads, it presents a problem in parturition for the larger brained hominids.      With the shortening of the ilium,  the distance between the hip joint and the 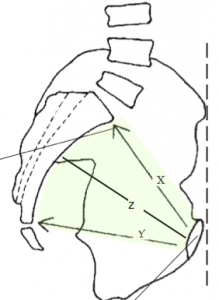 sacro-iliac (SI) joints is reduced and the sacrum lies at a lower position in relation to the pubic symphysis.  The human cranium is x4 larger than Australopithecine ape, and needs a larger pelvic AP diameter and an increase in width (coronal dimension) and lordotic curvature of the sacrum.    In the diagram :- X. True’ pelvic inlet of H.sap .     Y. Outlet     Z. The mid-plane conjugate diamete, the limiting dimension for childbirth was between “… the pubic symphysis and the centre of the sacrum”

In traversing the pelvic birth canal the human cranium has to engage at the inlet in the transverse plane.   In the mid-plane it rotates and change direction during it passage which is allowed by the sacrum becoming curved, with the radius of its arc centred at the pubis.  The head finally emerges in an AP plane at the outlet.

The pelvis of A. afarensis requires rotation of the sacrum which increases the wedge angle of each lower lumbar IV discs.

An obstetric dilemma, due to the increasing foetal encaphalisation, was increased by the changes to the pelvis and the lumbo-sacral junction due to the development of bipedalism.   Even in the best arranged modern facilities disproportion can occur between the maternal pelvis and the foetal head.  Jay Stock, at Cambridge (2011), has pointed out that a variety of other variable factors can also be involved, both for the size of the maternal pelvis and the foetal head resulting in disproportion, including ecological stresses such as the thermal environment and nutrition.   Maternal stature, obesity and increasing neonatal growth can be related to dietary shifts such as occurred with the development of agriculture.

Slijper EJ.  Biologic-anatomical Investigations on the Bipedal Gait and Upright Posture in Mammals, with special Reference to a Little Goat, born without Forelegs. 1942; Institute of Veterinary Anatomy of the State University, Utrecht, Holland (meeting).