The new office conditions which give rise to anxiety and fatigue, added to long hours spent in a physiologically unfriendly environment,  leads to high levels of morbidity and breakdown.    The simple explanations for this  state of affairs  is psychological ‘stress’.  An extreme expression of stress is described in America. Dotcom employees with excessive workloads in collapsing companies are found to be sabotaging equipment and systems and attacking fellow staff. This occured when Michael McDemott shot seven people at Edgwater technology.   Security and executive protection companies, such as Pinkertons and Interpahase International have found a recent business increase of 25%.

Psychosocial factors play a part in the aetiology of LBP.  But only a part.

This has received much attention since a Meta-analysis in Occupational Medicine (Waddell 2000).   Ignoring  the Cyriax diagnostic precision, suggests that most backache in the workplace is of psychosocial origin. 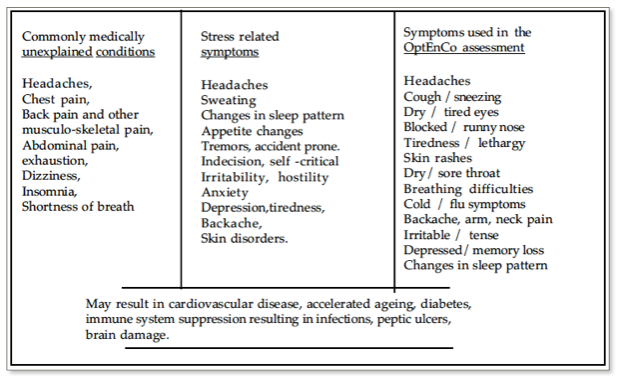 The pendulum of expert opinion is moving away from this extreme view.    Psycho-social factors are hardly a cause of LBP, predicting only 1-5% of new occurrences (  ) but are good predictors of back pain behaviour, as previously recognised by Cyriax.  Depending on the patient’s personality and the surrounding social input and by unsympathetic or inadequate medical, or alternative medical, practice may be important in the management of some cases and can be over emphasised. “Stop complaining and get back to work immediately” is an encouraging message for management in an industrial society which has an increasing problem with LBP and a penchant for litigation.  Psycho-social stress factors, independently of ergonomic stress, are universal and commonly recognised as a cause of office related minor morbidity, absenteeism and reduced productivity.

Air quality, light & noise are stressors and operate on a more basic physio-pathogenic level.   These are probably more aetiologically significant, but less easily  identified by the individual, than psychological stress.   John Jukes, an engineer and productivity consultant  made an unexpected finding when asked to investigate why a Design and Construction Unit (DCU) with a staff of 235 was failing to meet an expected target of 25%  increase of productivity when a CAD system, costing £1.5 million, was installed. They were urged to work harder and productivity actually fell further.  A number of indoor environmental factors were identified.

Not only was there an improvement of conditions, likely to be due to environmental deficiencies, improved but also the seemingly psychogenic stress related symptoms. This suggests that if environmental stressors are removed then people can deal more easily with their ongoing psychological stresses.

In the home a stress-free environment is at the command of the occupant and is easily achieved. The multi-occupancy workplace, such as an office, is commanded by management and staff, highly paid or not, have to fit in to an often stressful environment which has been determined by cost considerations. The effect this has on reducing productivity is only now slowly coming to be appreciated.

Physiologic Stressors and their remediation.

The modern air conditioned office is a surprisingly stressful environment. Long hours spent in a physiologically unfriendly environment, leads to high levels of morbidity and breakdown.  Although often not reported, minor morbidity undermines the efficiency and productivity of the individual. Dependent upon the environmental conditions occurring in a particular office this reduction in overall performance ranges from 18% to 52%.

HSE figures reveal that 1 in 11 of the work force suffer occupational health problems, involving 750,000 people, and 1.3 million lost days of production. These figures represent only the tip of an iceberg when considering the vast number of people suffering from minor symptoms which are ignored, being regarded as a part of normal working life. As a large percentage of employees are affected, a lower performance throughout an office can often go undetected if work task efficiency is not measured systematically. There were 164,000 claims for stress related conditions in1999-2000, an increase of a third on the previous year.  270, 000 people daily take a day of work . The cost to the UK is £7 billion a year (Sunday Times 25/3/01).  See ☛Prevalence and economic cost of LBP→

The simple explanations and for this state of affairs is the general assumption that the increase of morbidity is due to emotional stress. Companies have therefore turned to a bewildering variety of stress management strategies. This has given scope to gurus of many hues, starting with stress counseling and release.   There is not yet a general appreciation that environmental factors, air quality, light , noise, are stressors and operate on a more basic physio-pathogenic level and are probably more aetiologically significant, but less easily identified by the individual, than psychological stress. Although psychogenic factors may play a part in the office environment these may not be of prime importance.

In my experience there have been 2 ‘Paradigm changes’ in this field which are related.

Cyriax,, in the early 1940s, developed the functional system for the clinical diagnosis of soft tissue musculo-skeletal system disorders at St Thomas’s Hospital, London. This helped us to arrive at an accurate and localised anatomical diagnosis. A number of pseudo- conditions, guesswork and hocus-pocus, that prevailed at that time, therefore became extraneous. At the same time it became possible for this systematic clinical examination to identify a proportion of patients whose symptoms and signs did not correlate and whose signs on examination conflicted and did not add up to anything that suggested an anatomical localisation. These were categorised as ‘psychogenic’ (or p-g, psycho-social) as distinct from a recognisable ‘organic‘ lesion. He found that these patients, even if backache psychosocial factors overlay an ‘organic’ lesion, would fail to respond to treatment. This had to be avoided as treatment tended to continue indefinitely and the symptoms  become perpetuated.      Later the concept of ‘regional pain syndrome’ was developed which might account for some of these conditions on a vague neuro-physiological basis.

Environmental Improvements To Health and Productivity

Mankind evolved into Homo Sapiens Sapiens  (Modern Man) only some 237,000 years ago; according to recent mytochondrial DNA research conducted by Dr. Chris Stringer of the British Natural History Museum.

However, it’s only been in the last 200 years that any sizeable number of people have spent their working days indoors.  In the course of just the last 100 years, urbanisation has meant that increasing numbers of people have been forced to work indoors by artificial light.

In the last 25 years only have those self-same people been forced to work indoors – and in the presence of artificial flourescent light, air-conditioned heating and cooling, and in the presence of electro-magnetic fields generated by computers, faxes, telephones, printers, and other equipment.   In the same quarter of a century, state-of-the-art chemistry has provided the modern office with a whole range of artificial materials; – glues, finishes, carpeting and fabrics. They all utilise a mix of volatile organic compounds ( such as formaldehyde ) as a curing or hardening agent.  Though mankind does indeed possess a unique ability to mutate to deal with changed circumstances, the range and variety of new assaults on an individual’s physiology are not easily coped with – we simply can’t adapt fast enough. The transition from hunter and farmer, spending most daylight hours outdoors, to sedentary office worker has exacted a toll.   Spiralling rates of “stress-related” illnesses – from short-term problems of head-aches, upper-limb disorders, sore throats etc., – all the way to early morbidity  –  from hyper-tension, heart attacks, addiction, and even suicide… all are by-products of the modern office which have been listed by the (U.S.) Environment Protection Agency and the National Institute of Occupational Safety and Health .