Okamura is a major Japanese company and produced a reclined work-chair that was ahead of the field in addressing the biomechanical factors that are necessary to avoid or limit  LBP.

“Looks familiar, Henry?” was the message from John Jukes about this chair.  Sure enough it showed the semi  reclined work position that I had been advocating since 1998 on the web.  In my reply to Jukes I made the following points :-

As the 2T concept was considered ‘outlandish’ back then, this chair was a considerable leap forward by Okamura.  It has been suggested that Okamura designers had seen my web page.  I doubt this as they had failed to apply the essential requirements need to make this a more user friendly (and cheaper) work-chair.

However, congratulations to Okamura.  Also their Atlas model allows some insights into where their design went wrong in relation to the 2Tilt (2T) concept. 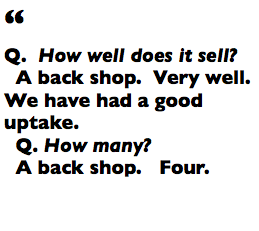 With the system shown below Okamura demonstrates the problem when the floor is used as the footrest in the reclined work position.  The work top would have to be very low and would be too low when in the upright mode.  The solution involves either automatically raising the work-top when entering the upright mode with a related variable height desk.  The problem is avoided with a desk-less work station. 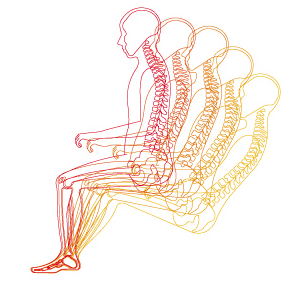 The Okamura website describes this “Ankle tilt reclining is a mechanism by which the chair seat sinks backward in sync with the reclining of the chair back. When reclining, the gradual opening of the ankle, knee, and hip joints without moving the ankle itself serves to create a relaxed state and promote better blood circulation. In addition, the fact that the chair seat does not push the body upward makes this a body-friendly reclining mechanism which reduces the likelihood of leg swelling and numbness. Since the chair moves in unison with the body, even if reclining is repeatedly done, your concentration will not be broken by feelings of discomfort”

Okamura work chairs are good of their sort but have failed to produce a 2Tilt model. but nearly there ….

The Contessa has pelvic support and a domed seat (ischial off-load) and the Leopard has FTS which might have a problem with slippage.

The Luxos is sort of reclined with a stool for a leg-rest.   Good pelvic support and a forward tilt which are alternatives and not complementary but equivalent to Ischial offload system.   In this photograph the headrest is well out of the way in the upright mode.

Okmaura Sabrina Chair has a “Synchro-Reclining” function enabling the chair backrest and seat to be synchronized by operating the lever located at the bottom of the seat.  The functions include a forward-tilting seat and adjustable armrests.    Okamura have seen the 2T details but fail to respond.   From the text thay may be   begining to accept my views   HAS