There seem to be 5 areas with overlapping needs for which a 2T Concept has a perfect application :-

It certainly has advantages over the beds illustrated, BLU-MED’s Portable Ward Beds for Mobile Hospitals has 1-inch aluminium tubing, Weighs only 17-pounds, including IV pole, mattress and decking and Folds to 32-inches x 42.5-inches x 4-inches.   This is impressive but, in addition, a 2T version would be more versatile with a wheelchair mode giving easy mobility.   The 2T prototypes also used 1″ tubing, slightly heavier, using steel, but probably stronger and more stable.

2. A 2T version of a trolley for A&E patients (gurney).   A design similar to the p/1 prototype monocoque version  is suggested.   It is mentioned in the press (30/10/2019) that there might be a big demand for the new patients admitted to the NHS who might be left lying around for long periods on uncomfortable trolleys.   A multiple use version is described below.

3. A 2T version of a bed.   See Hospital beds→ for a plethora of models.   A 2T version would be a major advance on most of them in cost, versatility and comfort.

Hospital resus.   A similar model to the above but of more robust design.  The ability to attend to the patient at a desired height and tilt is an advantage.  Rapid position change, particularly the Trendelenberg position, needed quickly in acute episodes, is a major advantage.

5. Cervical traction.   At present the patient lies supine and flat with traction from the skull to a weight attached over the end of the bed.  This is  prolonged and the position becomes uncomfortable, the constraint is a disadvantage and reading is difficult.   With a 2T design the patient can be tilted to a more comfortable, less constrained, semi-reclined position without altering the traction.

6. Patient fitting.  A version of the shell for specific needs for individual patients has already been described.      A patient would have a shell moulded for the torso that would then be mounted on a suitable version of a 2T chair instead of the standard shell.  This addresses the axial compression and pelvic tilt in the reclined mode.  In the upright mode the backrest stand away from the torso with a Forward Tilted seat and so becomes irrelevant.  But support might be needed and then we would have to think about Gorman’s Iliac version.  This is already built into the standard backrest shell, in a reduced form.  Plaster-of-Paris’ (POP) casts are commonly made in orthopaedic and physio departments and can be used to form a shell for the individual from fibreglass or other material at no great expense.   3D printing could be relevant.       ☛ ‘Special needs’→

A multi-purpose version of a 2T trolley for A&E  patients which provides a low cost product to help the NHS finances and, being ergonomically optimised,  provides the greatest comfort , which can also be used 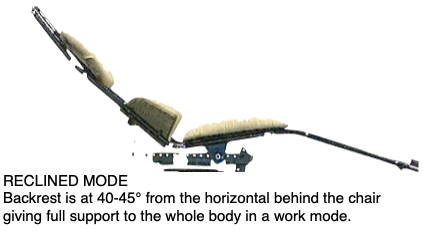 above, was optimised for prolonged office sitting.    It also shows a good configuration for an ambulant or semi-ambulant patient.   If visualisation of printed matter is not needed then ideally the reclination can be greater.

It can be used to illustrate of the variatons need for a trolley/emergency bed. 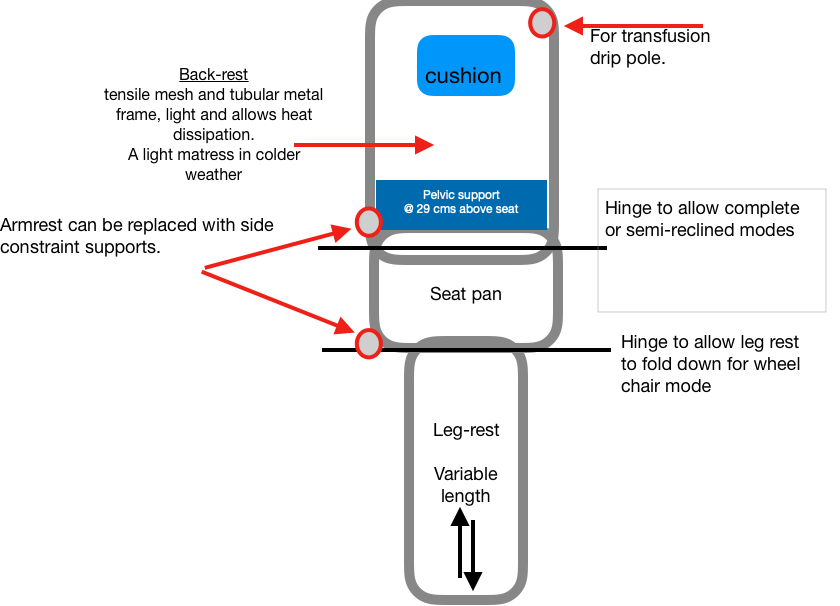 For a trolley to take most benefit from 2T, I would suggest that it not be fixed, but permit rotation when required. Achieving that and allowing for it safely, within the frame detailing, is the kind of functionality that is likely to take time to perfect.  (I need persuading!  Extra expense and unneccessary)

Attempting to also value engineer the design, so that it can be manufactured optimally for low budget purposes too, is also the kind of activity that takes time too. But I would anticipate that is needed equally for the NHS, as for disaster-relief instances in low-income countries.

The latter situations could also benefit from a stacking, or folding design, so that minimum volume is taken up during storage, particularly awaiting actual disaster instances, as well as for off-the-shelf use in standard hospital environments too.   (The base has to be disconnected from the shell)

Once those types of considerations become desirable and part of the brief’s goals, then the task is somewhat more complex than ‘just a simple gurney’.

A chair that is ergonomically superior to any other is likely to have an effect on the market.

Ten years ago, the advantage of the 2T concept was apparent to John Jukes, a pioneer in the optimisation of the office environment  and Prof. Derek Clements-Croom, Director of Research in the School of Construction Management and Engineering at the University of Reading.  Also the reaction of most who had experienced LBP was immediately positive – “Where can I buy this chair” (of course, they couldn’t).   The reaction of chair designers and manufacturers was different.        Blank incomprehension.  Mainly due to ‘Familiarity bias’. 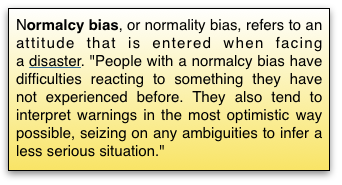 Western people have been indoctrinated that adverse mid upright sitting (See ☛Mandal→) is ergonomically ‘correct’ and have sat in this sort of chair since childhood and so  ‘Familiarity bias’ results. This is a normal reaction of people who have only experienced one way of doing things and results in various levels of denial and incomprehension, when exposed to anything new.  This mind-set can prevent them from seeing the real benefits of a chair that is scientifically shown to be correct but looks different and is actually more comfortable.   It will take time to change this perception and will happen once chairs designed on bio-mechanically correct lines are manufactured and their advantages explained.  Those who are liable to backache will be the first to see the advantages and will create a demand.   The newer generation is more open to fresh ideas and takes quickly to a 2T design.   Insurance is already begining to take an interest (personal communication).

However, as mentioned, perceptions are changing.   At a major international design show in London on 19th Sept. 2013, I found several major Scandinavian and German manufacturers who accepted my views but hesitated to translated them into actual products.  I was even invited to Germany!    This year (2015) several designers said “I have read your views and agree, But…..” .   Which was usually ‘Familiarity Bias’.   Offices of companies like Google, Skype and Facebook, iare like a playground with innovative furniture which would have looked outrageous ten years ago.  The 2T concept that I introduced in 1998 also looked outrageous ten years ago.   It is now begining to look quite ordinary although designers have difficulty in recognising the underlying bio-mechanical essentials.

For example, recliner chairs are only suitable for home use.  A 2T (or 3M) chair is different only because it can be used as a work chair.   Will people buy recliners when a cheaper and better designed dual purpose chair comes on the market?  This may also be particularly relevant to the growing ‘gamer’ market.

To my question “what is the most important factor in chair design?”The answer,  wrongly’ was always :-Comfort. (See Comfort→)

This work is not protected and is pro bono publico.    I am available for advice or consultation.   But you will have to be quick!   CONTACT

You are advised to trawl through the whole work to get the full picture.   But for details, see  ← Design details   and check with the menu →